A place for poems, songs, rhymes, and traditions from around the world for both kids and grown-ups to enjoy!
Advertisement
Improvisational Maltese Folk Music
August 20th, 2020

GÄ§ana is a type of traditional Maltese folk music that has an improvisational aspect to it. According to Wikipedia, “The very origins of Għana can be traced back to early peasant farmers.” GÄ§ana was a way to pass time while doing chores. Sometimes women especially would sing while doing wash on the rooftops with a neighbor who was doing the same chore. They would even gossip or converse in rhyme as part of a song. They also did this in communal washhouses (see photo – the washhouses are interesting in their own right. They were built around natural caves where water flows continuously. It’s where some Maltese ladies used to do their wash.) 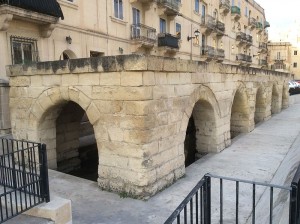 “After washing, clothes were hung out to dry on the flat roofs typical of Maltese houses. From one roof it is easy to see â and indeed sing â across to neighbouring roofs over waist height fences. So essentially, there existed a pseudo community across the skyline of residential Malta, one in which women often took part in informal and unaccompanied gÄ§ana sessions.” –Wikipedia

Albert sent us this link to a sample of the impromptu traditional singing in Malta.

Albert wrote, “It is folk music, only traditional. Nowadays modern Maltese music is internationalised. Which means the traditional Għana is only sung at L-Imnarja, the festival of ‘St Peter and St. Paul’. There is a folk festival with traditional rabbit stew at ‘il-buskett’, one of the few wooded places left in Malta. Malta was once filled with trees which were chopped down to make ships.

Many thanks to Albert for sharing this info and link!

This article was posted on Thursday, August 20th, 2020 at 8:23 pm and is filed under Countries & Cultures, Folk Songs, Malta, Maltese Folk Music, Mama Lisa. You can follow any responses to this entry through the RSS 2.0 feed. You can skip to the end and leave a response. Pinging is currently not allowed.