A place for poems, songs, rhymes, and traditions from around the world for both kids and grown-ups to enjoy!
Advertisement
Hina Matsuri 雛祭り – The Doll Festival in Japan – Has its Roots in an Old Chinese Purification Ceremony
March 2nd, 2007

Tomorrow, March 3rd, is the Hina Matsuri 雛祭り or Doll Festival in Japan.

The Japanese celebration seems to have originated in China, where there was a festival called Shang-suu that had also been celebrated on March 3rd, at least since the 3rd century AD. Shang-suu may go back before that time but the date may have shifted. (It looks like Shang-suu eventually merged with the Ching Ming Festival – Remembrance of Ancestors Day – which is still celebrated today in China, Taiwan and Hong Kong. Now it takes place on April 4th or 5th.)

Shang-suu was a day of purification. Suu stands for snake, so for convenience, I’ll translate it here as the Day of the Snake (as it came to be called later in Japan). In China, Shamans were considered people who could see evil spirits. On Shang-suu, the shamans gave people baths using herbs in rivers to wash away the evil spirits.

We know that by the 11th century in Japan, the nobles had adapted a similar ceremony. This was called Mi-no-hi or jō-shi. We can date it because it’s mentioned in a book of the times called the Tales of Genji. By that time, it wasn’t the actual person who was cleansed in the river, but a doll who represented him or her.

In the Tales of Genji it says, “It was the day of the serpent, the first such day in the Third Month. ‘The day when a man who has worries goes down and washes them away,’ said one of his (Genji’s) men, admirably informed, it would seem, in all the annual observances. Genji thought he could see something of himself in the rather large doll being cast off to sea, bearing away sins and tribulations. ‘Cast away to drift on an alien vastness, I grieve for more than a doll cast out to sea.'”

Today, in parts of Japan, some people still load boats with dolls and send them off to sea. Now, though, the festival is mostly for girls. It’s called Hina Nagashi Matsuri or Floating Dolls Festival. Traditionally, people first rub the dolls to pass any bad luck onto the doll. Then they let the doll float down the river in a little boat and then out to sea to cast off all evilness and bad spirits.

In some towns they load up big boats and many people cast their old dolls in them. In the photo below, the dolls are actually made with fish food!

Between the 11th century and today, the tradition of Hina Nagashi Matsuri went from being mainly for the nobility to spreading to the whole population. Part of the reason for this was that merchants wanted to sell their paper dolls at this time of year. So they encouraged more of the population to buy them. By the 18th century, the dolls became more intricate and expensive. People no longer wanted to float them out to sea. So they started bringing them to temples to get rid of the evil.

Eventually, people started buying alters for their dolls called hina dan (doll alter) on which to display them in their own homes. These became like shrines. They made offerings of shirosake (sweet sake made from fermented rice) and hishi mochi (diamond-shaped rice cakes with three to five layers). The alters are decorated with peach blossoms which is thought to repel evilness. 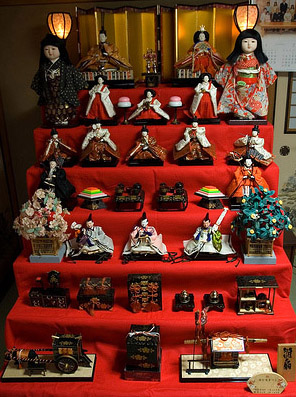 The hina matsuri dolls are now called hina ningyo. They’re often passed down from mother to daughter from generation to generation. The hope behind celebrating the Hina Matsuri is that the daughter will live a long, healthy and happy life.

Here’s the Hina Matsuri Song that’s sung all over Japan on this day. You can hear it being sung by Sakura and Hatsami…

MP3 of the Hina Matsuri Song

You can read more about Hina Matsuri in a previous post I wrote about it. It tells more about the hina ningyo dolls.

You can visit the Mama Lisa’s World Hina Matsuri Song Page for sheet music for this song.

Many thanks to Sakura and Hatsami for singing the Hina Matsuri Song and to Peter Galante of Learn Japanese with JapanesePod101.com for allowing us to use this wonderful recording! The recording is from their podcast about the Hina Matsuri Festival (it’s mainly in English).

For anyone interested in reading more about Shang-ssu and Hina Matsuri, I’d recommend an article by Alsace Yen called Shang-ssu Festival and Its Myths in China and Japan

This article was posted on Friday, March 2nd, 2007 at 6:32 pm and is filed under China, Ching Ming Festival, Countries & Cultures, English, Hina Matsuri - Doll Festival - Girls' Day, Hina Matsuri Song, Holiday Songs, Holidays Around the World, Japan, Japanese, Japanese Kids Songs, Languages, Mama Lisa, Momo no Sekku - Peach Blossom Festival, Questions, USA. You can follow any responses to this entry through the RSS 2.0 feed. You can skip to the end and leave a response. Pinging is currently not allowed.