A place for poems, songs, rhymes, and traditions from around the world for both kids and grown-ups to enjoy!
Advertisement
Early Cajun Creole Children’s Songs & Traditional Songs
February 19th, 2020 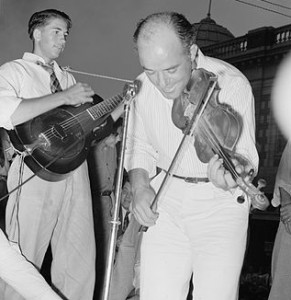 Saute CrapaudÂ (Jump Frog). You’ve uncovered this. You also have “Clementine” on your site, a French song with Spanish influence.

A) Many of these songs come in the form of lullabies. Some of them are so ancient, I’ve only seen them referenced in articles with titles. Many come from the Afro-Creole heritage, much from New Orleans.

Rabbit Stole The Pumpkin.
1st recorded in 1929 by John Bertrand. No lyrics.

Gabriel
First recorded by Louis Noel in 1949. He’s backed up Happy Fats, Doc Guidry, and others.

Other songs referenced but not heard are “L’Armours Marianne”, “Selim To Quitte La Plaine”, “Vous T’e In Morico”, “Zozo Mokeur”

Many of these are listed in Mina Monroe’s “Bayou Ballads”

B) Many became children’s tunes later due to the nature of the fun lyrics.

Mosquito Ate Up My SweetheartÂ (More about it hereÂ – video here)

C) Of course, Cajuns covered other popular children’s tunes, and sung them in French.
Where, Oh, Where Has My Little Dog Gone.

Many thanks to Wade Falcon for sharing this with us! -Mama Lisa

You can find our collection of Cajun Creole Songs here.

This article was posted on Wednesday, February 19th, 2020 at 6:50 pm and is filed under Acadia, Cajun, Cajun French, Children's Songs, Countries & Cultures, Creole, Languages, Mama Lisa, Traditional Songs, USA. You can follow any responses to this entry through the RSS 2.0 feed. You can leave a response, or trackback from your own site.