A place for poems, songs, rhymes, and traditions from around the world for both kids and grown-ups to enjoy!
Advertisement
Der Struwwelpeter – Slovenly Peter – A German Poem with Recording
April 10th, 2018

“Der Struwwelpeter” is a collection of 10 story poemsÂ written in 1845 by GermanÂ physician,Â Heinrich Hoffmann (1809 â 1894). He wrote the book for his 3 year old son, after searching for a children’s book for Christmas and not being happy with any he found. All of the poemsÂ have a moral about the consequences of bad behavior. They’re somewhat like Grimm’s Fairy Tales in that they’re cautionary tales for children in a dangerous world.

One of the more mild poems in the book is aboutÂ theÂ results of not grooming. It’s the first poem and the title of the book, “Der Struwwelpeter”. Long ago, the title was translated into English as “Shock-headed Peter”. Mark Twain translated it as “Slovenly Peter”. Meanwhile, Wordsmith gives the definition of “A person with long, thick, disheveled hair.” In my translation below, I used Mark Twain’s translation.

Here you can see an early illustration of Slovenly-Peter… 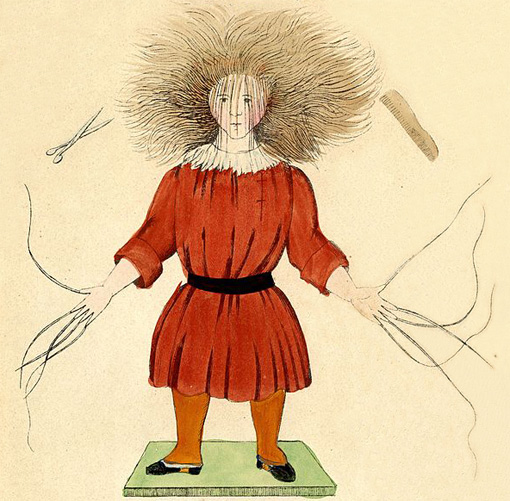 Here’s a less-literal but more rhyming translation from “The English Struwwelpeter, or, Pretty Stories and Funny Pictures” from 1909:

Just look at him! There he stands,
With his nasty hair and hands.
See! his nails are never cut;
They are grim’d as black as soot ;
And the sloven, I declare,
Never once has comb’d his hair;
Any thing to me is sweeter
Than to see Shock-headed Peter.

Some of the otherÂ verses in the book are downright creepy, including one where a child’s thumbs are chopped off because he wouldn’t stop sucking them. You can tell that some German people agree with my assessment when you read comments on different sites on the internet. Half of the commentators refer to it as a beloved childhood book, while the other half is still creeped out or has nightmares about it!

It’s no surprise that it was an inspiration for Tim Burton’s movie, Edward Scissorhands.

An interesting defense of the author is by a commentator on Wordsmith who wrote, “As a physician, Dr Hoffmann experienced firsthand the diseases and accidents that might befall children in the streets where sanitation and safety were not yet of concern.Â  His intent was to scare kids â including his own children – into washing their hair, watching where they were going, and keeping their fingers out of their mouths.”

If you’d like to read more of the poems, you can find online versions of the book at the links below…

This article was posted on Tuesday, April 10th, 2018 at 6:59 pm and is filed under Austria, Books & Stories, Countries & Cultures, Der Struwwelpeter, German, Germany, Heinrich Hoffman, Kids Books, Languages, Mama Lisa, MP3's, MP3's of Poems, Poems, Poems about Children, Poems about Cleanliness, Poems about Neatness, Poetry, Poets, Recordings, Recordings of Poems, Struwwelpeter. You can follow any responses to this entry through the RSS 2.0 feed. You can skip to the end and leave a response. Pinging is currently not allowed.