A place for poems, songs, rhymes, and traditions from around the world for both kids and grown-ups to enjoy!
Advertisement
Bredele – French Alsatian Cookies
December 22nd, 2015 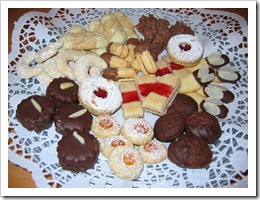 Bredele are Christmas cookies from the Alsace region of France. The word bredele is Alsatian in origin. Alsatian is a German dialect.  The region of Alsace is on the border of Germany. It has switched hands between Germany and France four times since 1871. Yet "bredele" predates that, possibly going back as early as the 1500’s.

"Bredele" comes from the German word "brot" ("brod" is an older version of the word – meaning "bread" in English). The "ele" ending makes it a diminutive (similar to how "dog" becomes "doggie"). So it could translate as "little bread". Even though it refers to cookies. "Bredele" is used in Alsace, as well as the rest of France, to refer to Christmas cookies.

Alsatians start making their bredele early in the holiday season, sometimes as early as November. Most families have their own secret recipes passed down through the generations. Some people make many types of bredele… as many as 10 – 12 kinds.

In the video below, which is in French, you can see a chef making many types of bredele. He says that the base ingredients of these cookies is butter, sugar, eggs and flour. Then to make different types he adds almonds, powdered sugar, hazelnuts, cinnamon and baking powder.  He also makes different shaped cookies.

People store bredele in tins and some families with young kids, and even with much older ones, will have to hide them to save them for Christmas.

The man at the end of the video (@ 3:00) complains about how he has to search all over the house for the bredele but can’t find them!  Where are the bredele?!

Many thanks to Monique Palomares for pointing me to articles about bredele. Monique works with me on the French and Spanish versions of Mama Lisa’s World. It’s interesting to note that when I asked Monique about Christmas cookies in France, she said that "bredele" are the only cookies in France that are specifically made for Christmas.

This article was posted on Tuesday, December 22nd, 2015 at 10:10 pm and is filed under Alsace, Alsatian, Bredele, Christmas Cookies, Countries & Cultures, Desserts, France, Languages, Recipes of the World. You can follow any responses to this entry through the RSS 2.0 feed. You can skip to the end and leave a response. Pinging is currently not allowed.