A place for poems, songs, rhymes, and traditions from around the world for both kids and grown-ups to enjoy!
Advertisement
Best-known Norwegian Lullabies and Kids Songs
December 2nd, 2013 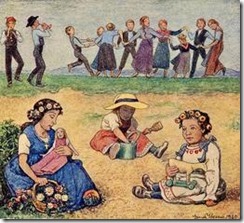 I asked Siri Randem from the Norwegian language music site Barnesanger about the most popular kids songs and lullabies in Norway. This was her response:

Some people sing BÃ¦, bÃ¦ lille lam (a children’s song) or Mikkel Rev (similar). Everyone in Norway has heard these two in childhood. They are not "real" lullabies, however.

I suppose Gjendines bÃ¥nsull as recorded by Edward Grieg is popular. Also the Swedish/Norwegian lullaby called Byssan lull as recorded/collected by the Swedish singer Evert Taube is popular and beautiful, as well as Den fyste song. The last one is still subject to copyright, I guess.

The song I’ve always heard is this: Bissam bissam baadne (Baad’n lÃ¥t). A bit archaic in my version, but often popularised in newer song books.

Thanks for sharing Siri!

This article was posted on Monday, December 2nd, 2013 at 9:02 am and is filed under Children's Songs, Countries & Cultures, Languages, Lullabies, Norway, Norwegian, Norwegian Children's Songs, Norwegian Lullabies. You can follow any responses to this entry through the RSS 2.0 feed. You can leave a response, or trackback from your own site.