A place for poems, songs, rhymes, and traditions from around the world for both kids and grown-ups to enjoy!
Advertisement
The Italian Game of Marbles
March 13th, 2018 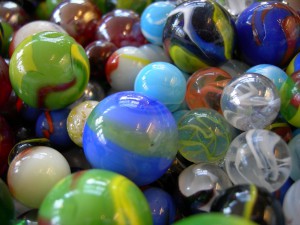 Written by Emanuela Marsura, a schoolteacher from Italy. Emanuela is interested in reviving the old-time games of childhood. A time when all children would play outside together, regardless of age. A time when most games were played with inexpensive objects that everyone can easily find.

Courtyards used to be filled with the games and voices of boys and girls of all ages, the smallest kids following the biggest, teacher and student together in the art of learning.

They played the Game of 4 Corners with trees marking the boundaries, at hiding-go-seek behind hedges, at dodgeball, tag and Prisonball with a line traced with the foot, at balls thrown against house walls. They jumped to the rhythm of the jump rope and to chants. They ran barefoot to escape the hunter on duty, whoever was “It”.

The courtyard is the natural setting for games. The gravel offers the possibility of the finest summer games, as do sandy beaches. In both places, one can play the game of marbles or “quercetti.” Even adults love this game!

1. A big sandy or pebbly space on which to construct a track. If you’re on a beach, it can be made by having the child drag their legs or backside in the sand to make a circuit. They can use their heels in gravel. It should be a long track with curves, with hills and valleys, and with raised edges or it can be very simple, but no matter what, it should have a hole that serves as the finish line.

You can see a track being made in this photo below… 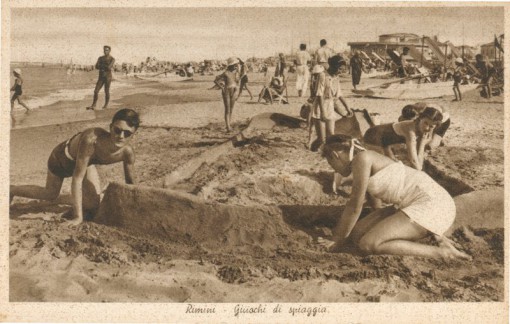 You can see a huge track in the video below…

2. Marbles are also needed, one per player, of which there are different types depending upon the terrain you’re playing on:

The marble ball, can be created by hand-sculpting clay and baking it in the oven. It might not be perfectly round and therefore it’ll create many variations in its trajectory during the game. Or else you can use a glass marble, either with colored swirls inside or just one color. A “marble” for the beach is usually bigger, lighter and made of plastic. These are found in Italy, with two hemispheres, one in color and the other clear, containing an image inside of a cyclist or other athletic champion. A ping pong ball might be a good substitute.

1. You need anywhere from 2Â – 10 or even 15 players.
2. Agree beforehand on the number of rounds.
3. Each player on their turn launches their own marble by flicking the middle or index finger against the thumb and into the marble.
4. To pass around the bends, position your wrist on the raised edges of the track and then flick the marble.
5. If the marble leaves the track, return the marble from where you launched it. The next player gets to go.
6. If a marble is hit by another marble it becomes the property of the one who hit it.
7. The winner is the first one to arrive at the end of the track or who finishes the predetermined amount ofÂ rounds while taking the biggest number of marbles during the game.

Each player should pick a marble andÂ let the games commence!

Many thanks toÂ Emanuela Marsura for explaining howÂ the Game of Marbles is played in Italy!Â  A longer version of this article was first published in Italian inÂ Emanuela Marsura’s sectionÂ ofÂ QualBuonVentoÂ magazine.

This article was posted on Tuesday, March 13th, 2018 at 7:14 pm and is filed under Countries & Cultures, Games Around the World, Italian Game of Marbles, Italy. You can follow any responses to this entry through the RSS 2.0 feed. You can skip to the end and leave a response. Pinging is currently not allowed.

One Response to “The Italian Game of Marbles”