A place for poems, songs, rhymes, and traditions from around the world for both kids and grown-ups to enjoy!
Advertisement
The Four Corners Game
March 14th, 2018

Monique Palomares wrote to me about the Game of Four Corners that’s played in France, Italy and elsewhere. Monique was a primary school teacher and now works with us on the French and Spanish versions of Mama Lisa’s World. 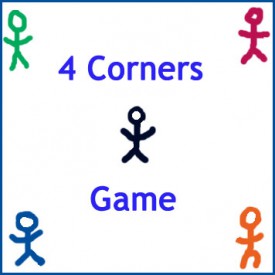 The Game of 4 Corners is for children 5 years and up and is played with 5 people.

Mark out a square using anything in the terrainâ¦ trees, walls, shrubs or anything available. Smaller kids can make a smaller square and bigger kids can use a larger area.

Our version was as followsâ¦

The players in the corners changed places as soon as they saw they could do it without risking being without a corner spot. For example, they might switch spots when the player in the middle was watching the others. Sometimes, we’d make a discreet sign to another player to signal, “let’s switch spots”. Sometimes player 1 wanted to change spots with player 2, but player 3 or 4 (or both) would take advantage by taking the place of player 1 or 2, which gave the player in the middle an opening to take a corner spot.

The game ends when the players have had enough!

Many thanks to Monique for explaining how to play the game of Four Corners!

This article was posted on Wednesday, March 14th, 2018 at 7:21 pm and is filed under Four Corners Game, France, Games Around the World, Italy, Mama Lisa, USA. You can follow any responses to this entry through the RSS 2.0 feed. You can skip to the end and leave a response. Pinging is currently not allowed.