Loi Krathong is a lantern festival in Thailand. "Loy" means "float" and "Krathong" is a little boat (or a small float) made from banana leaves. So "Loy Krathong" is roughly "float banana leaf boats". 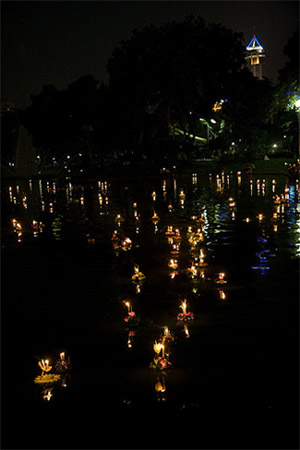 *These lines are both "Loy Loy Krathong", which I'm translating here to give its actual meaning.
**Ram Wong is a Thai dance that became modernized during WW1.
***"Good merit" can be more literally translated as "making merit". "Making merit" is the Buddhist concept of doing good deeds in this life to help you later in life or in the next life. One can gain merit and transfer part of it to loved ones who have passed away to ease their suffering in their new life. People go to the temple in the morning on Loy Krathong to "make merit" as part of the holiday.

The Loi Krathong or Floating Lanterns Festival takes place on the night of the full moon in the 12th lunar month, which is usually in November. As explained above, a "Krathong" is a little ship made from banana leaves, and "Loy" is "to float". So "Loy Krathong" means "to float little ships made from banana leaves". During the evening of the festival, people all over Thailand do just that! They light candles and joss-sticks (incense), put them in their ships, and launch their Krathongs on a nearby river. They believe the little boats carry all their bad luck away. The ships themselves are an offering to the water goddess. It's also to transfer "merit" to those who have passed away. (See the note at *** above).

Many thanks to Burt and Joy at Soppong River Inn in Thailand for providing the recording of Loy Krathong.

Many thanks to Intorn Wattana for pointing out the videos of Loy Krathong.

Photo at top: Robertpollai for Wikipedia