A place for poems, songs, rhymes, and traditions from around the world for both kids and grown-ups to enjoy!
Advertisement
Yodeling in the Alps
May 4th, 2016 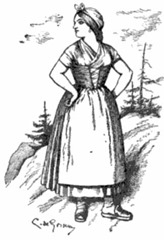 Yodeling began as a way of communicating over long distances in mountainous regions. It’s believed that people as early as the Stone Ages yodeled!

Some of the earliest yodeling songs were harmonies without actual words. These were especially popular in the Swiss and Austrian Alps.  This type of yodeling is perfectly summed up by the Travel Guide to Austria:

"What really gets under the skin is when the yodel is sung in several voices. The singers stand around in a circle, and one man or woman strikes up the theme, loud and clear; the other voices come in, going with or singing a counterpoint to the main themes, in syllables and tones that rise up against one another as majestically as the mountain chains of the Alps and with melodic flourishes akin to mountain ascents and valley descents."

Yodeling songs with actual words are a more modern development… dating back to the early 19th century and becoming especially popular in the 1830’s.

You can learn a Swiss yodeling song with words from 1832 called, Vo Luzern uf WÃ¤ggis zue on our Songs from Switzerland pages.

One fun fact about yodeling is that it’s also a way to find your cows.  Cows react to the sound of yodeling by shaking their heads. That in turn rings the bell around their necks, allowing their owners to find them.

This article was posted on Wednesday, May 4th, 2016 at 4:03 pm and is filed under Countries & Cultures, German, Germany, Languages, Music, Swiss German Dialects, Switzerland, Yodeling. You can follow any responses to this entry through the RSS 2.0 feed. You can skip to the end and leave a response. Pinging is currently not allowed.