A place for poems, songs, rhymes, and traditions from around the world for both kids and grown-ups to enjoy!
Advertisement
Yankee Doodle Helped Start a Revolution in Japan!
October 11th, 2014 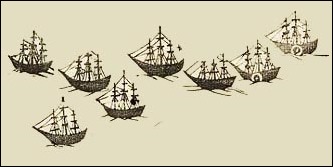 Can you believe that the American song "Yankee Doodle" is the music that played at the start of the revolution that lead to an Imperial Japan?

‘Yankee Doodle" is a song from prerevolutionary America. The British used it to mock the American Colonists. Then the Americans turned around and proudly claimed the song as their own. 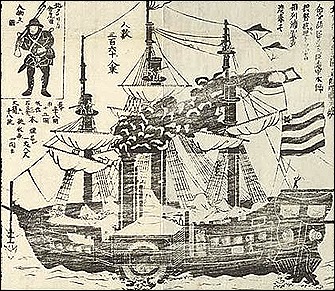 American Admiral Perry went on a mission to Japan to force a trade treaty upon them. He was aboard a black steam frigate.

On July 8th 1853, Perry arrived at Uraga Harbor in Japan. A feudal government called the Tokugawa Shogunate ruled Japan. Perry forced a conflict with the Shogunate.

Over the next few days, Perry was asked to leave and in turn threatened to use force. Eventually, he was allowed to land. Japanese people refer to this event as the Assault of Kurobune (meaning "Black Ships").

On July 14th, Perry landed at Kurihama Beach with the U.S. Marine Corps for the purpose of handing a personal letter from President Fillmore to the Tokugawa Shogunate. While disembarking, the US military band played "Yankee Doodle".

"Yankee Doodle" was an omen of historical change in Japan.

Thanks very much to Sadao Mazuka for contributing to this article.

This article was posted on Saturday, October 11th, 2014 at 4:59 pm and is filed under American Kids Songs, Children's Songs, Childrens Music, Countries & Cultures, English, Japan, Japanese, Japanese Kids Songs, Languages, Music, The History of Music and Songs, Traditional Music, USA, Yankee Doodle. You can follow any responses to this entry through the RSS 2.0 feed. You can skip to the end and leave a response. Pinging is currently not allowed.