A place for poems, songs, rhymes, and traditions from around the world for both kids and grown-ups to enjoy!
Advertisement
A Whistled Turkish Language
September 3rd, 2015 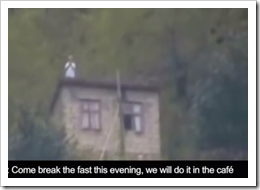 People in the northeastern mountains of Turkey use a form a whistling to communicate with people far away.  It’s a version of the Turkish language that’s whistled instead of spoken. The whistles actually translate to Turkish speech. It’s called kuÅ dili or Whistled Turkish. Roughly 10,000 people can still communicate in it.

The sound echoes among the mountains and can be used to communicate relatively far distances (up to 5 kilometers). You can hear Whistled Turkish in the video below…

What’s interesting is that researchers have found that when people communicate in Whistled Turkish the left side of their brains light up for language use, but the right side also lights up for the auditory qualities of whistling like pitch and melody.

Read more about Whistled Turkish on this Science magazine site.

This article was posted on Thursday, September 3rd, 2015 at 6:50 pm and is filed under Countries & Cultures, Languages, Turkey, Turkish, Whistled Turkish. You can follow any responses to this entry through the RSS 2.0 feed. You can leave a response, or trackback from your own site.