A place for poems, songs, rhymes, and traditions from around the world for both kids and grown-ups to enjoy!
Advertisement
We’re Happy Little Vegemites
May 3rd, 2010

Vegemite is a popular yeast paste eaten in Australia for breakfast and lunch. 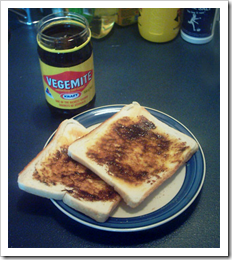 The jingle for a 1950’s commercial for Vegemite has since become a popular children’s song in Australia.  It’s called, "We’re Happy Little Vegemites".

"We’re Happy Little Vegemites” everybody knows, and loves this song!

We’re happy little Vegemites,
As bright as bright can be!
We all enjoy our Vegemite
For breakfast, lunch and tea!
Our mummies say we’re growing stronger
Every single week,
Because we love our Vegemite,
We all adore our Vegemite,
It puts a rose in every cheek!

It’s true, we really do love our vegemite.

One of Australia’s great kids songs, and it’s an advertisement! If you have a chance to google the original ad, you should have a sticky beak!

[Note by Mama Lisa: having a sticky beak is Australian slang for being nosey or inquisitive.   But here I believe it means, “Have a peak”.]

Vegemite is fairly salty, with a strong flavour, so you don’t ever need much of it. We eat it on sandwiches or on toast. It is so good on toast with melted butter! Vegemite and cheese sandwiches are very popular in the school yard.

(I just read over that and it sounds like we eat it everyday….some people do, but definitely not all.)

I would have to say in all my travels and with all my international friends back in Australia I am yet to meet a foreigner who actually likes vegemite! It can be a bit of an overwhelming taste I think.  Perhaps you just need to grow up with it to truly appreciate it.

Thanks for letting us know about Vegemite in Australia Sara!

Here you can watch some people singing the Vegemites song…

This article was posted on Monday, May 3rd, 2010 at 9:46 am and is filed under Australia, Australian Kids Songs, Breakfast and Brunch, Children's Songs, Countries & Cultures, Lunch, Recipes of the World, Vegemite, We're Happy Little Vegemites. You can follow any responses to this entry through the RSS 2.0 feed. You can skip to the end and leave a response. Pinging is currently not allowed.