A place for poems, songs, rhymes, and traditions from around the world for both kids and grown-ups to enjoy!
Advertisement
The Village Blacksmith – A Poem by Longfellow
June 20th, 2010

The Village Blacksmith was written by the American poet, Henry Wadsworth Longfellow (1807 – 1882). It harks back to a different time… I’d like to say simpler time, but one must wonder if it really was simpler… with mothers dying much more often in childbearing, it was a hard life for some families.

This poem is not just about a blacksmith, but what he can teach us about life with his hard, honest work: “Our fortunes must be wrought… Each burning deed and thought.” 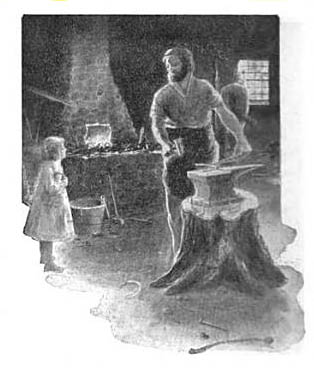 Under a spreading chestnut-tree
The village smithy stands;
The smith, a mighty man is he,
With large and sinewy hands;
And the muscles of his brawny arms
Are strong as iron bands.

His hair is crisp, and black, and long,
His face is like the tan;
His brow is wet with honest sweat,
He earns whate’er he can,
And looks the whole world in the face,
For he owes not any man.

Week in, week out, from morn till night,
You can hear his bellows blow;
You can hear him swing his heavy sledge,
With measured beat and slow,
Like a sexton ringing the village bell,
When the evening sun is low.

And children coming home from school
Look in at the open door;
They love to see the flaming forge,
And hear the bellows roar,
And catch the burning sparks that fly
Like chaff from a threshing-floor.

He goes on Sunday to the church,
And sits among his boys;
He hears the parson pray and preach,
He hears his daughter’s voice,
Singing in the village choir,
And it makes his heart rejoice.

It sounds to him like her mother’s voice,
Singing in Paradise!
He needs must think of her once more,
How in the grave she lies;
And with his haul, rough hand he wipes
A tear out of his eyes.

Toiling,–rejoicing,–sorrowing,
Onward through life he goes;
Each morning sees some task begin,
Each evening sees it close
Something attempted, something done,
Has earned a night’s repose.

Thanks, thanks to thee, my worthy friend,
For the lesson thou hast taught!
Thus at the flaming forge of life
Our fortunes must be wrought;
Thus on its sounding anvil shaped
Each burning deed and thought.

The 2nd to last verse sums up the poem nicely:

Toiling,ârejoicing,âsorrowing,
Onward through life he goes;
Each morning sees some task begin,
Each evening sees it close
Something attempted, something done,
Has earned a nightâs repose.

For the Blacksmith life is about his work and family. He can feel satisfied at night knowing that he’s done his job and provided for them.

We were recently sent an old Japanese song called The Village Blacksmith -村の鍛冶屋 that is thought to be based on this poem. Check it out on Mama Lisa’s World!

This article was posted on Sunday, June 20th, 2010 at 9:29 am and is filed under Countries & Cultures, English, Henry Wadsworth Longfellow, Languages, Mama Lisa, Poems, Poetry, Poets, The Village Blacksmith, United Kingdom, USA. You can follow any responses to this entry through the RSS 2.0 feed. You can skip to the end and leave a response. Pinging is currently not allowed.