A place for poems, songs, rhymes, and traditions from around the world for both kids and grown-ups to enjoy!
Advertisement
The Mosque at the End of the World in Morocco
June 9th, 2011 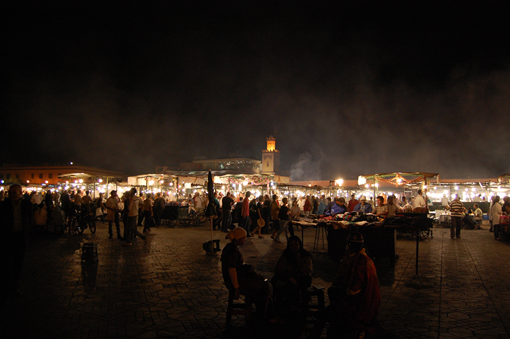 This fantastic photo was taken in Jamaa el Fna Square in Morocco by Monique Palomares on a visit to the city of Marrakech last year.  The square looks like a market, but it’s actually filled with outdoor restaurants.  The tall tower in the background, with the light on top, is the Koutoubia Mosque.

The name of the square means Mosque Courtyard according to Wikipedia.  But they say the name could also be interpreted as "The Mosque at the End of the World", which is what the BBC called it.  I think that name suits the photo above!

Monique wrote, "I also took a photo just after sunset (below) with the Koutoubia Mosque in the background and Djemaa El Fna square on the foreground.  I took it from the Argana cafÃ©.  They make delicious "orange-vanille" there, which is two balls of vanilla ice-cream in a tall juice glass with fresh orange juice and sweetened whipped cream." 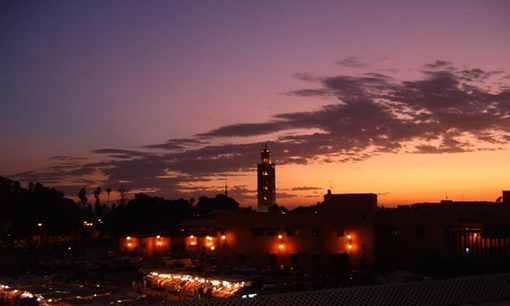 Below is a close-up of the Koutoubia Mosque that can be seen in the background of both photos above.  The mosque dates back to the 12th century. 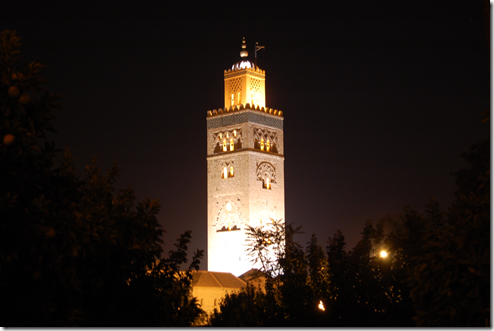 Many thanks to Monique Palomares for sharing these photos from Morocco.  Monique works with me on the Spanish and French versions of Mama Lisa’s World.

UPDATE: We just learned that the Argana CafÃ© was the victim of a bombing attack in April 2011.  Our hearts go out to the victims.

This article was posted on Thursday, June 9th, 2011 at 12:47 pm and is filed under Countries & Cultures, Marrakesh, Morocco, Morocco, Photos, Photos, Photos of Places, Traveling. You can follow any responses to this entry through the RSS 2.0 feed. You can skip to the end and leave a response. Pinging is currently not allowed.