A place for poems, songs, rhymes, and traditions from around the world for both kids and grown-ups to enjoy!
Advertisement
The Mardi Gras Festival in Mamou, Louisiana
February 1st, 2016 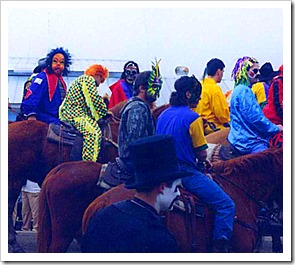 "I was born and raised in Mamou… The Mardi Gras festival came about as a ‘last day before lent; Catholic time of fasting’, leading up to Easter. Many Catholics in Cajun Country, give up drinking, as their penance, and some give up eating their favorite foods, such as Gumbo.

The Courir de Mardi Gras dresses up in brightly colored costumes and rides horseback around the Town to ask the farmers for a donation to make Gumbo when they return to the center of town. The wives, traditionally make the Gumbo . The Captain of the Mardi Gras tells them to hold back and wait til he gives the signal to stampede onto the farm. The Captain asks the farmers to donate chicken, sausage, rice or Roux to make the Gumbo. If the farmer says ‘yes’, then, the Capt. waves his flag to signal the Courirs to come on; many times, the farmer gives them a live chicken, but, they have to chase it to get it. As a show of appreciation, the Mardi Gras wagon of singers, accordion players, harmonica and triangle players perform for the farmer and the Mardi Gras riders dance for the farmer; some dance on the saddle of their horse. Once they have circled the Town, making 30+ stops, they return to the center of Town and everybody dances, and of course, they drink. The [Mardi Gras] song is not about drinking, only about their travels and the charity for the Gumbo. There is music for the Mamou Mardi Gras Song; my cousin was the man who sang it and played the triangle. All cities / towns / communities have their own version of Mardi Gras…

Mamou has some nicknames, like Grande Mamou or Ti Mamou, and yes, Ti Mamou refers petite or small. But, we just call our Town, ‘Mamou’, pronounced , ‘Mah-moo’." -Tami

John wrote, "We all came together when we had no money to go to the rich and get what they had to offer in order to make a large gumboâ¦’for everyone’ in order to feast before lent. The costumes were just to ensure no one was able to tell who the other was."

Thanks to Tami and John for writing about Mardi Gras in Cajun Country.

This article was posted on Monday, February 1st, 2016 at 4:53 pm and is filed under Cajun, Countries & Cultures, Customs and Traditions, Going Door-to-Door, Holiday Songs, Holidays Around the World, Mardi Gras, Mardi Gras Songs, USA. You can follow any responses to this entry through the RSS 2.0 feed. You can skip to the end and leave a response. Pinging is currently not allowed.