A place for poems, songs, rhymes, and traditions from around the world for both kids and grown-ups to enjoy!
Advertisement
The Lion and the Hare – An Old Fable from India
October 28th, 2010 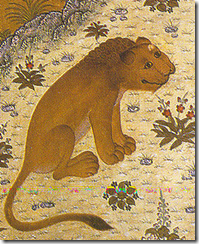 The Lion and The Hare

This is one of the cycle stories from India in which the weaker animal gets the better of the stronger one through wit.  It’s from the Panchatantra, a collection of animal tales and fables from the 3rd century BC or earlier.  The tales were originally in Sanskrit. Here you can read the tale and listen to an mp3 of it.

Listen to The Lion and the Hare (mp3)

NCE upon a time there was a Lion, who used daily to devour one of the beasts of the forest. They had to come up one after another, when called for. At last it came to the Hare’s turn to be eaten, and he did not want to be eaten at all. He lingered and he dallied, and when at last he plucked up courage to come, he was very late. The Lion, when he saw the Hare coming, bounded towards him. The Hare said-

"Uncle Lion*, I know I am late, and you have cause to be angry. But really it is not my fault. There is another Lion in our part of the jungle, and he says that he is master, and you are nobody. In fact, when I showed him that I positively would come to you he was very angry."

"Ha!" said the Lion, roaring; "who says he is my master? Show him to me. I’ll teach him who rules the forest."

"Come along then," said the Hare.

They went a long way, until they came to a well. The Hare looked down into the well. "He was here just now," said he.

The Lion looked in, and at the bottom he saw what looked like a Lion in the water. He shook his mane – the other Lion shook his mane. He roared – the echo of a roar came up from the bottom of the well. "Let me get at him!" roared the Lion. In he jumped-splash! Nothing more was ever heard of that Lion, and the beasts of the forest were glad to be left in peace. They put their heads together, and composed a verse of poetry, which is always sung in that forest on Sundays:

"The Hare is small, but by his wit
He now has got the best of it;
By folly down the Lion fell,
And lost his life within the well."

*Or MÃ¡mÃº- brother of my mother a term of flattery or endearment. 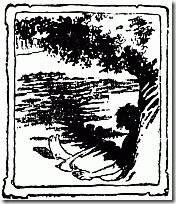 Note: The original verse is…

(Through folly the lion met his end:
Can even a hare destroy a lion?)

I believe the verse above is in Sanskrit or Hindi – if anyone can confirm this please email me. Mama Lisa

You can hear another version of this on YouTube.

Collected by W. Crooke
Originally Told by Suryabali, MirzÃ¡pur.
And Retold by W.H. Drouse (with no changes to the basic tale.)
Illustrated by W.H. Robinson.

You can read another version of this tale in English in North Indian Notes and Queries (1894).

You can also read the tale of The Lion and the Hare in Sanskrit with other stories from the Panchatantra.

This article was posted on Thursday, October 28th, 2010 at 12:35 pm and is filed under Books & Stories, Countries & Cultures, Hindi, India, Languages, Mama Lisa, Panchatantra, Recordings, Sanskrit, The Lion and The Hare. You can follow any responses to this entry through the RSS 2.0 feed. You can leave a response, or trackback from your own site.