A place for poems, songs, rhymes, and traditions from around the world for both kids and grown-ups to enjoy!
Advertisement
The Lebrechaun – A Poem
March 16th, 2013 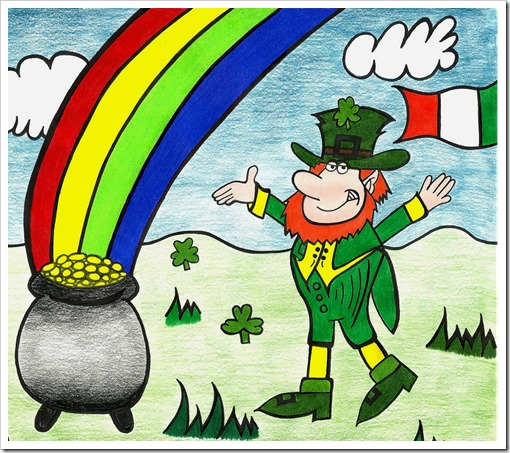 The leprechaun is a fairy shoemaker eagerly sought by people who like to get rich quick. If the mortal who meets him will only keep his eyes fixed upon the fairy, the little chap will have to disclose the hiding place of a certain crock of gold. But the leprechaun is so full of tricks to make people look away from him, that few of those who have met him have got rich at his expense.

Here’s a poem about this tricksy little guyâ¦.

The Leprechaun By Denis Aloysius McCarthy

O summer is the time to see the little leprechaun;

He haunts the Irish hedges at the very peep o’ dawn;

And then you know he’s close at hand, the foxy fairy chap.

And, faith, the little leprechaun has knowledge of a place

Where lies a crock o’ fairy gold â the hoarding of his race;

And, if you keep your eye on him, you have him in your power,

And he must tell you where ’tis hid, that golden fairy dower.

But, ah! beware the leprechaun, for he has tricks to blind,

And if you look away from him he’ll vanish like the wind.

And sure ’tis I that know it, for I flung away my chance

Of ever being wealthy by one fatal, fleeting glance.

For once at early morning, ere the sun had drunk the dew,

I came upon the leprechaun at work upon a shoe;

At work upon a fairy shoe, the crabbed little elf,

And, O, so very busy that he didn’t see myself.

"Good morning to your honor, sir," all flustered like, I said.

‘Twas coolly he replied to me, betraying no surprise;

In fact, I thought I saw a roguish twinkle in his eyes.

"Tis early you are up," said I, not knowing what to say.

But, though I rise so early, yet I honestly declare

I’m never up so early as my neighbor over there."

With that he jerked his head a bit, and, thinking to behold

Another fairy cobbler with another crock of gold,

I looked away a moment â in that moment he was gone,

And vanished all my fortune with the tricksy leprechaun!

Many thanks to Gracie Gralike for sharing her Leprechaun drawing!

This article was posted on Saturday, March 16th, 2013 at 9:20 pm and is filed under Countries & Cultures, English, Folk Lore, Holidays Around the World, Ireland, Languages, Leprechauns, Poems, Poems about Leprechauns, Poetry, St. Patrick's Day, St. Patrick's Day Poems, USA. You can follow any responses to this entry through the RSS 2.0 feed. You can skip to the end and leave a response. Pinging is currently not allowed.