A place for poems, songs, rhymes, and traditions from around the world for both kids and grown-ups to enjoy!
Advertisement
The Grape Harvest in France
September 20th, 2020

Written by Monique Palomares who grew up in the south of France in the 1950’s and 60’s. WhenÂ Monique was young she took part in the grape harvesting with her dad and the rest of her family.

France is the second biggest producer of wine in the world after Italy. The cultivation of grapes in France goes back to the Greek colonization in the 6th century BCE. Wine growing makes up 15% of France’s agricultural income. You can see how the harvest of grapes is an important time in France! 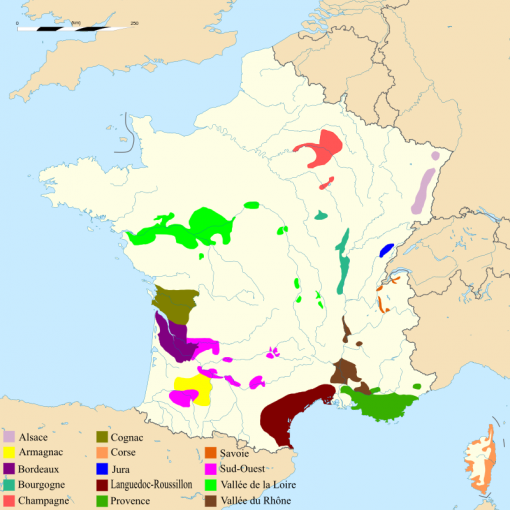 Nowadays, close to three quarters of the harvest is done with grape harvesting machines. The terrainÂ used to be too steep, the vines too small, and the rows too close together to allow for machines. So the vines were replanted further apart with sufficient space between the rows and they were tied to stakes with wires to allow a machine to get by. However, some appellations of wineÂ prohibit the use of machines and the harvest must be done by hand because the bunches must remain whole.

[Note: An appellation is a legally defined and protected area in France where the grapes are grown for wine. Certain rules must be followed by vineyards to maintain an appellation.]

“The machine spans the row of vines. The gathering arms shake, beat and even whip, vibrating the vegetationÂ (at a speed of up to 600 strokes per minute) andÂ then dropping the grapes into a recovery mechanism, onto a “carpet”, or into buckets. A vacuum blows the harvest toÂ remove the leaves and branches that fall during the shaking process.”-French Wikipedia.

The machine makes it possible to harvest when the grape reaches its maximum maturity. To harvest at night for white and rosÃ© wines for example. But it also allows some people to go and harvest vines at night thatÂ don’t belong to them, to the great despair of the legitimate owner who seesÂ their harvest go out the window! There’s always a downside to everything.

In places whereÂ it’s not possible or authorized to use a harvesting machine, the harvesting is done by hand. The grape picker cuts the bunches with pruning shears and places them in a bucket or basket which is then emptied into a bin called a “hotte” that is worn on the back. TheÂ bin isÂ then emptied into aÂ vatÂ or suitable cratesÂ which are then transported to the cellar for the next step in wine-making. 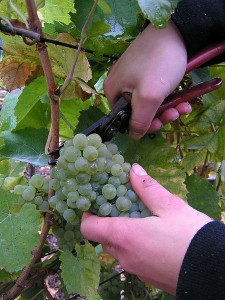 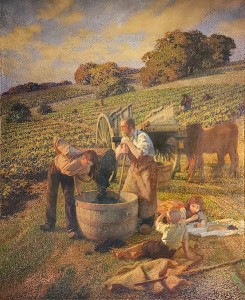 In the past, in certain regions including mine in the south, the bucket was emptied into a large wooden tub called a “comporte”. It looks like a wooden barrel cut in half.Â In the comporte, the grapes were crushed with a type of mallet called a “masse”.

When the comporte was full it weighed betweenÂ 177Â and 220 pounds. It had a small rod coming out of either side.Â  Two men would put a long pole under each rod and carryÂ the comporte to the edge of the field. Later a special wheelbarrow was developed and one man alone couldÂ transport it.Â But ifÂ the ground was muddy the old method had to be used because the mud would stick to the wheel of the wheelbarrow and prevent it from moving.Â Once the tubs were at the edge of the field they wereÂ loaded onto a cart pulled by a horse (later by a tractor).

When I wasÂ little (a long time ago!) we would climb onto the cart using a long plankÂ calledÂ ” le plateau”. Sometimes, before going back to work at lunchtime or in the evening when theÂ tubs were full for the last time, my father would return an empty tub and put theÂ plank on it. My sister or girlfriend and I would play seesaw on it. 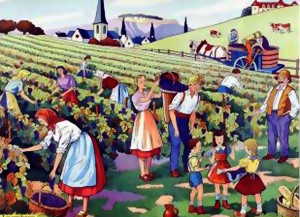 The grape harvest isÂ hard work. You’re bending over all day and it hurts your back.Â Â The bucketÂ is heavy when it’s full and after it’s rained the mud sticks to it, so it’s even worse. In the morning, if there’s stillÂ dew from the night before or if it rained, you have to adapt your outfit so as not to get soaked after picking grapes from just a few plants. So then you have to wear plastic apronsÂ with plastic sleevesÂ and boots, etc.Â You must also protect yourself from the sun. You have to watch out for wasps which like to nestÂ in the grape plants. And you must never put a bunch of grapes directly to your mouth. (This is also valid when you buy grapes, especially at the market!)

Despite everything, we sang a lot. It didn’t prevent us from working! When there were young men and women, if a young girl forgot to cut a bunch and a young man noticed it, he would takeÂ take it and go and smear the girl’s mouth with it. We called it “making a mustache”. It was a good trick when you wanted to be “mustached” by a certain young man…Â It allowed us to make connections!Â It was enough to help us “forget” the hard part!

At the end of the harvest, we used to have a party and the boss would offer the workers a meal or an afternoon snack.

Harvesting grapes by hand can take 3 weeks. Nowadays, with climate change, it’s earlier in the year. Also, in the past students would returnÂ to school after the harvest. It was tolerated in a way that hasn’t existed for many years. All students must return to school on the prescribed date!

Thanks to Monique Palomares for contributing this article. Monique works with me on the French version of Mama Lisa’s World.

You can see more images of the grape harvest in France here.

This article was posted on Sunday, September 20th, 2020 at 9:43 pm and is filed under Mama Lisa. You can follow any responses to this entry through the RSS 2.0 feed. You can skip to the end and leave a response. Pinging is currently not allowed.