A place for poems, songs, rhymes, and traditions from around the world for both kids and grown-ups to enjoy!
Advertisement
The Cooties were Originally Lice!
May 21st, 2019 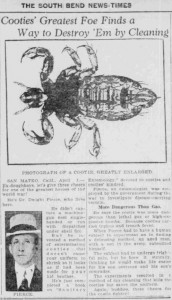 That old childhood âdisease” calledÂ âThe Cootiesâ is part a game where a girl tags a boy or a boy tags a girl and says, âYou got The Cooties!â

Of course, before gettingÂ touched and contracting The Cooties, the girls and boysÂ try run away from each other. In some versions of the game, if your fingers are crossed when you get tagged, you canât get The Cooties. There’s also a rhyme for getting immunized againstÂ The Cooties in advance called Circle, Circle, Dot, Dot.

The term “cooties” was first used by the British soldiers during World War IÂ to refer to lice.Â According to Wikipedia, “The word is thought to originate from the Austronesian language family, in which the Philippine languages, Maori and Malaysian-Indonesian word kutu refers to a parasitic biting insect.”

The Cooties Game has different names in other countries…Â  In Italy, it’s called la peste (the plague). In Denmark, it’s called pigelus and drengelus meaning “girl lice” and “boy lice”. In Serbia the game is known as Å¡ugaÂ (meaning scabies).

It’s interesting that “Cooties” became a childhood game around the world!

This article was posted on Tuesday, May 21st, 2019 at 8:16 pm and is filed under Countries & Cultures, England, English, Games Around the World, Indonesian, Languages, Made-up Childhood Diseases and Conditions, Malay, Mama Lisa, Maori, The Cooties, Tongan, USA. You can follow any responses to this entry through the RSS 2.0 feed. You can skip to the end and leave a response. Pinging is currently not allowed.