A place for poems, songs, rhymes, and traditions from around the world for both kids and grown-ups to enjoy!
Advertisement
The Blind Men and the Elephant with an Illustration and an MP3 Recording
November 23rd, 2009

The Blind Men and the Elephant is a poem by American poet John Godfrey Saxe (1816-1887) based on an Indian parable. 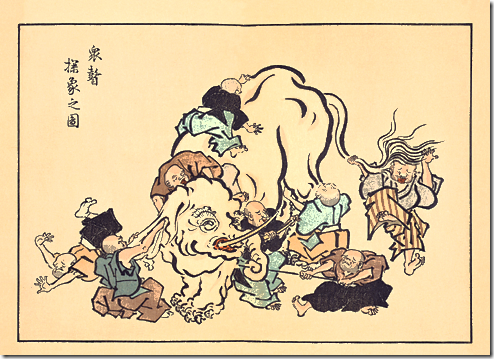 The Blind Men and the Elephant
by John Godfrey Saxe

MP3 Recording of The Blind Men and the Elephant

It was six men of Indostan
To learning much inclined,
Who went to see the Elephant
(Though all of them were blind),
That each by observation
Might satisfy the mind.

The first approached the Elephant,
And happening to fall
Against his broad and sturdy side,
At once began to bawl:
"Bless me, it seems the Elephant
Is very like a wall".

The second, feeling of his tusk,
Cried, "Ho! What have we here
So very round and smooth and sharp?
To me ’tis mighty clear
This wonder of an Elephant
Is very like a spear".

The third approached the animal,
And happening to take
The squirming trunk within his hands,
Then boldly up and spake:
"I see," quoth he, "the Elephant
Is very like a snake."

The Fourth reached out an eager hand,
And felt about the knee.
"What most this wondrous beast is like
Is mighty plain," quoth he;
"’Tis clear enough the Elephant
Is very like a tree!"

The Fifth, who chanced to touch the ear,
Said: "E’en the blindest man
Can tell what this resembles most;
Deny the fact who can,
This marvel of an Elephant
Is very like a fan!"

The Sixth no sooner had begun
About the beast to grope,
Than, seizing on the swinging tail
That fell within his scope,
"I see," quoth he, "the Elephant
Is very like a rope!"

And so these men of Indostan
Disputed loud and long,
Each in his own opinion
Exceeding stiff and strong,
Though each was partly in the right
And all were in the wrong.

So oft in theologic wars,
The disputants, I ween,
Rail on in utter ignorance
Of what each other mean,
And prate about an Elephant
Not one of them has seen!

Each blind man felt a different part of the elephant and therefore had a different conception of what an elephant was.  It shows how reality is different depending on your perspective of it… and also how none of them had the full picture of the elephant… just like we can’t fully see the universe we live in.

Something to think about!

Note: The illustration above was originally a Ukiyo-e woodcut print called, "Blind monks examining an elephant" by Japanese artist Itcho Hanabusa (1652-1724).  The computer image above has been graphically edited by Lisa Yannucci.

This article was posted on Monday, November 23rd, 2009 at 11:14 pm and is filed under Countries & Cultures, English, Languages, MP3 Recordings, MP3's, Poems, Poetry, The Blind Men and The Elephant, USA. You can follow any responses to this entry through the RSS 2.0 feed. You can skip to the end and leave a response. Pinging is currently not allowed.