A place for poems, songs, rhymes, and traditions from around the world for both kids and grown-ups to enjoy!
Advertisement
Shock-headed Peter – A Cautionary Poem about Cleanliness, with an MP3
January 21st, 2012

This poem comes from the German book Der Struwwelpeter oder lustige Geschichten und drollige Bilder by Heinrich Hoffman. It was first published in German in 1844.  It’s a collection of 10 poems that are cautionary tales. 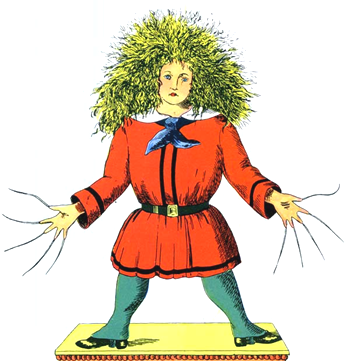 Just look at him! there he stands,

With his nasty hair and hands.

See! his nails are never cut;

They are grimed as black as soot;

And the sloven, I declare,

Never once has combed his hair;

Anything to me is sweeter

Than to see Shock-headed Peter.

This poem was originally written in German.  Here’s the original text with two recordings in the original German:

Interestingly, Mark Twain came upon this book when he was in Berlin in 1891. He translated it as a Christmas present for his three daughters. Here’s Twain’s translation of this poem:

See this frowsy “cratur” â
Pah! It’s Struwwelpeter!
On his fingers rusty,
On his tow-head musty,
Scissors seldom come;
Let his talons grow a year, â
Hardly ever combs his hair, â
Do any loathe him? Some!
They hail him “Modern Satyre â
Disgusting Struwwelpeter.”

This article was posted on Saturday, January 21st, 2012 at 10:18 am and is filed under Countries & Cultures, England, English, German, Germany, Heinrich Hoffman, Languages, Poems, Poems about Children, Poems about Cleanliness, Poems about Neatness, Poetry, Poets, Recordings, Recordings of Poems, USA. You can follow any responses to this entry through the RSS 2.0 feed. You can skip to the end and leave a response. Pinging is currently not allowed.

One Response to “Shock-headed Peter – A Cautionary Poem about Cleanliness, with an MP3”