A place for poems, songs, rhymes, and traditions from around the world for both kids and grown-ups to enjoy!
Advertisement
Shigin Style of Reciting Poetry in Japan
June 5th, 2014 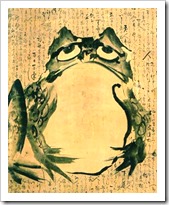 Shigin is a way of reciting poems in Japanese that most likely dates back to the 5th century.  The poems are chanted, often before an audience.

We’re lucky enough to have a Shigin recitation of the famous Haiku poem, âFuruike yaâ (Old Pond).  The poem was recited by Shihoko Mazuka.  You can hear it below and read along with the poem and translation.

A frog jumping into it

Many thanks to Sadao and Shihoko Mazuka for the recording and for explaining about Shigin recitations.

This article was posted on Thursday, June 5th, 2014 at 9:07 am and is filed under Countries & Cultures, Haiku, Japan, Japanese, Japanese Poems, Languages, MP3's, MP3's of Poems, Poems, Poetry, Recordings, Recordings of Poems, Shigin Recitations. You can follow any responses to this entry through the RSS 2.0 feed. You can leave a response, or trackback from your own site.