A place for poems, songs, rhymes, and traditions from around the world for both kids and grown-ups to enjoy!
Advertisement
Rock-Paper-Scissors – A Choosing Game
February 23rd, 2012

Rock â Paper – Scissors is a game used to decide something between two kids… like who goes first, who gets something, etc.

Two players say together at the same time, "Rock, Paper, Scissors and Shoot!".  Then  put their hands out at exactly the same time in one of three signs, "rock", "Paper" or "Scissors" that you can see in the illustration below.  You make a fist for "rock".  You put out a flat hand horizontally to the ground for "paper" or to choose "scissors", you put out the the index and middle finger imitating scissors. 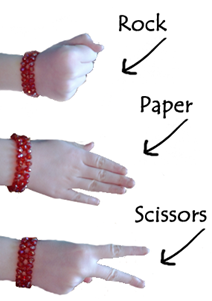 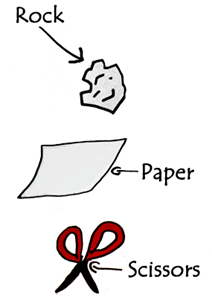 Here’s how you know who won the round depending upon which symbol each kid put out:

If both kids choose the same item, they have to replay the round.

According to Wikipedia, Rock-Paper-Scissors is also called Roshambo and originally comes from China.  It’s so old that it dates back about 2,000 years to the time of the Han Dynasty (206 BCE – 220 CE).  This game is now played in many countries around the world.

This article was posted on Thursday, February 23rd, 2012 at 6:14 pm and is filed under Arts and Crafts, Choosing Games, Countries & Cultures, England, English, Games Around the World, Illustrations, Languages, Rock, Paper, Scissors, USA. You can follow any responses to this entry through the RSS 2.0 feed. You can skip to the end and leave a response. Pinging is currently not allowed.