A place for poems, songs, rhymes, and traditions from around the world for both kids and grown-ups to enjoy!
Advertisement
Poem – The Landing of the Pilgrims with MP3 Recording
November 15th, 2011

The poem The Landing of the Pilgrims by Felicia Hemans (1749-1835) is about why the pilgrims made the perilous journey to the new land… to have religious freedom.  Here we present the poem with an mp3 recording. 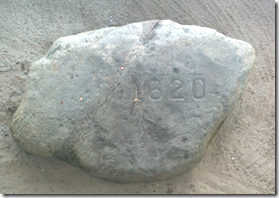 First I wanted to to show a photo of Plymouth Rock.  It’s the site believed to be where the pilgrims first landed.  Though no one really knows if this is the exact spot they actually landed on and it’s really doubtful it is this precise site.  It’s still fun to visit since one hears so much about Plymouth Rock. 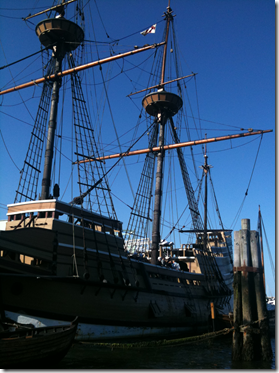 Mayflower II.  It was made precisely to the same specs as the real Mayflower which journey to Plymouth back in 1620.

It’s fascinating to visit the Mayflower II.  You can see exactly how small it really was.  The crew had full access to the ship.  But the passengers, all 102 of them, had to stay below in the hold.  They had little light and space.  The journey lasted 66 days.  That alone helps you understand just how determined the pilgrims were.

It’s also neat that the Mayflower II was made in England.  It was sailed to the US back in 1957.

When you visit the ship, there’s a crew onboard who act like the original crew would have.  The captain was really fascinating to talk to.

MP3 Recording of The Landing of the Pilgrims

The Landing of the Pilgrims

The breaking waves dashed high, On a stern and rock-bound coast,
And the woods against a stormy sky Their giant branches tossed;

And the heavy night hung dark The hills and waters o’er,
When a band of exiles moored their bark On the wild New England shore.

Not as the conqueror comes, They, the true-hearted came;
Not with the roll of the stirring drums, And the trumpet that sings of fame;

Not as the flying come, In silence and in fear;–
They shook the depths of the desert gloom With their hymns of lofty cheer.

Amidst the storm they sang, And the stars heard, and the sea;
And the sounding aisles of the dim woods rang To the anthem of the free!

The ocean eagle soared From his nest by the white wave’s foam;
And the rocking pines of the forest roared– This was their welcome home!

There were men with hoary hair Amidst that pilgrim band:
Why had they come to wither there, Away from their childhood’s land?

There was woman’s fearless eye, Lit by her deep love’s truth;
There was manhood’s brow serenely high, And the fiery heart of youth.

What sought they thus afar? Bright jewels of the mine?
The wealth of seas, the spoils of war?– They sought a faith’s pure shrine!

Ay, call it holy ground, The soil where first they trod.
They have left unstained what there they found– Freedom to worship God.