A place for poems, songs, rhymes, and traditions from around the world for both kids and grown-ups to enjoy!
Advertisement
Nenette & Rintintin – Good Luck Charm Dolls
June 11th, 2012

NÃ©nette et Rintintin were originally toy dolls for children that were first produced in France in 1913.  The boy doll is NÃ©nette and the girl doll is Rintintin. In the tradition of romance in France, theyâre seen as a couple! 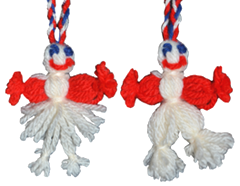 When WWI came, people started making little NÃ©nette et Rintintin dolls out of yarn.  They were given to soldiers as good luck charms.  They were also worn by Parisians to protect them during air raids.

These dolls were little -only about an inch tall – so they could be pinned onto clothes, worn on hats, in buttonholes or around the neck like a necklace.  They could be found in all different colorsâ¦ Yet they were often made in the blue, white and red of the flag.  Eventually, you could find 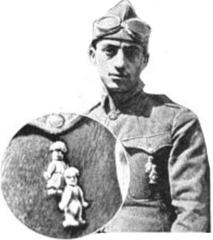 these dolls made out of different materials too like straw and silk.

Monique wrote from France, âI remember now making those dolls. I remember sewing eyes and a mouth on the face, but it’s so long ago.â  When she was making them it was well 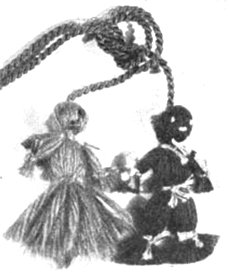 Monique wrote, âI remember making the dolls bigger than 1â tall since by the time I was making them it wasn’t about being a good luck charm, but just about making some doll and keeping us busy! Ours were made to be about 3 or 4 inches tall.â

Interestingly, the name of the dog in the old TV show Rintintin comes from these dolls.  Hereâs how that came about: An American soldier named Lee Duncan found a litter of live pups in a bombed out kennel in Lorraine a couple of months before the war ended.  He kept two of the pups and named them after the good luck charms NÃ©nette and Rintintin.  When he returned home to California he taught Rintintin tricks.  The dog was able to leap to very great heights.  His friend filmed the dog jumping 11 feet and Duncan decided to get him into a career in Hollywood.  The rest of Rintintinâs story is history!

Thereâs a French rhyme about Nenette et Rintintin that you can learn on Mama Lisaâs Worldâs French song pages.

Photo Credits:
Photo of soldier is from “Popular Mechanics Magazine”, Volume 30 from 1918.
Photo of the Poulbot Pair NÃ©nette et Rintintin is courtesy of SLHDolls on eBay. 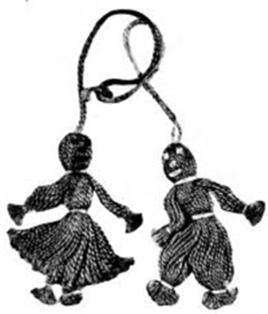 This article was posted on Monday, June 11th, 2012 at 3:58 pm and is filed under Arts and Crafts, Countries & Cultures, Customs and Traditions, Dolls, Folk Lore, France, Good Luck, Good Luck Charms, Nenette & Rintintin Yarn Dolls, Superstitions, Toys, USA. You can follow any responses to this entry through the RSS 2.0 feed. You can skip to the end and leave a response. Pinging is currently not allowed.