A place for poems, songs, rhymes, and traditions from around the world for both kids and grown-ups to enjoy!
Advertisement
National Foreign Language Week
March 8th, 2007

In the United States, National Foreign Language Week is being celebrated this week. It’s normally held the first week of March each year.

National Foreign Language Week was started 50 years ago, in 1957, by President Eisenhower to encourage Americans to learn a second language, thereby improving our communication with (and hopefully understanding of) the rest of the world. 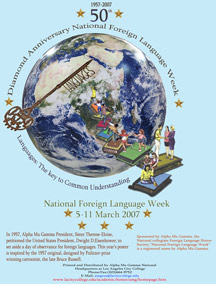 National Foreign Language Week is mainly celebrated in schools around the country.

In my son’s middle school, each day they’re focusing on a different language. The morning announcements are said in that day’s language. The students are encouraged to wear colors from that country’s flag. So if the language is French and the country is France â they’re supposed to wear the colors of the French flag – red, white and blue. 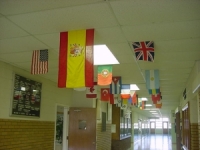 Some other good ideas I’ve seen are:

Does anyone know of other ideas to promote cultural awareness and an interest in language learning in schools? We’d love to hear about any other ideas. Please comment below.

This article was posted on Thursday, March 8th, 2007 at 7:40 pm and is filed under Countries & Cultures, Holidays Around the World, Languages, Languages, Languages, Learning, National Foreign Language Week, Teaching. You can follow any responses to this entry through the RSS 2.0 feed. You can skip to the end and leave a response. Pinging is currently not allowed.