A place for poems, songs, rhymes, and traditions from around the world for both kids and grown-ups to enjoy!
Advertisement
My Cousin and His Grandfather’s Pigeons
October 6th, 2013

My cousin, James Yannucci, wrote about how his grandfather (on the other side of his family, his mother’s side) used to raise carrier pigeons. Here’s what he wrote: 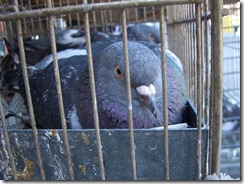 This may get a little awkward but oh well…

When I was a kid growing up in NY this was a very "Italian" hobby to have. When my grandfather Rosalino (aka Muzzy or Rudy) LoCurto retired he moved us all out to Ronkonkoma [on Long Island, New York], where many of my cousins still live to this day. He built a coop similar to but quite a bit larger than the ones represented in this article and started collecting and breeding show and homer pigeons (to go with all of our chickens but thatâs another story.) He had done this as a child and was in a sense reliving his youth.

I was young but remember well each evening him giving me a small chore to do with his birds. Sometimes I had to feed them, so he taught me to mimic the pigeons’ coo exactly (I’m a little rusty but can still do it, however if you ask me to I won’t.) The purpose of the coo was to keep the pigeons calm when entering the coop so they do not fly around and possibly break a leg or a wing and the method works. Other times I would exercise them. Pigeons are generally quite lazy and if you don’t make them fly they won’t. Even if you push them all out of the coop at once they will simply fly together in one big circle overhead and come right back to the comfort they know as home. To remedy this, he taught me to first kick them out of the coop and then stand in front of the entrance swinging an old cane fishing pole in circles overhead for around 15 minutes or so, they wouldn’t be able to land and would get the proper amount of exercise.

In the spring my grandfather would take the homers all the way to Queens. He would meet up with his old partner in crime, Rubberhead, and have coffee and reminisce. Then he would attach a small metal tube containing a rolled up piece of paper noted with the time to each of their legs, and let them go. He would then drive the 45 miles back home to meet them as they arrived. All of this only lasted a couple of years or so until either my grandfather’s hobbyist attention span hit its outer limits and he moved on to his next project or my grandmother Fiorenza (aka Dolly, Flo, Florence) LoCurto put the Italian kibosh on it, most likely the latter, and by Italian kibosh I mean a lot of bi-lingual screaming, cursing, and disowning each other. Either way, it’s always been a warm memory of mine. I’m the oldest of 7 grandchildren (on my mother’s side), so I probably remember these things a little more clearly than my brother and cousins, so this is a small offering from me to them.

I found this video below of a pigeon cooing.  Come on Jim, let’s hear you do it!

I remember visiting that coop when I visited your house as a kid, Jim. Thanks for sharing the story behind it.

This article was posted on Sunday, October 6th, 2013 at 4:37 pm and is filed under Countries & Cultures, Italian American, USA, YouTube. You can follow any responses to this entry through the RSS 2.0 feed. You can skip to the end and leave a response. Pinging is currently not allowed.

2 Responses to “My Cousin and His Grandfather’s Pigeons”