A place for poems, songs, rhymes, and traditions from around the world for both kids and grown-ups to enjoy!
Advertisement
Mother’s Day in France
May 21st, 2020

Mother’s Day is celebratedÂ  in France in a similar way to many other countries.Â Â People visit theirs moms and bring flowers, and perhaps evenÂ make a nice dessert!Â At the very last people willÂ call their mom to wish them a Happy Mother’s DayÂ saying, “Bonne fÃªte, Maman!”

In 1896, and again in 1906, there were efforts in France to honor mothers who had a lot of children. The idea was to encourage families to have moreÂ kids since the birthrate was falling.

Then during WWI, members of American relief organizations in France spread the idea of Mother’s Day. The soldiersÂ would send home postcards for the holiday. In fact, a wholeÂ industry flourished making postcards for soldiers. One type of postcards was embroideredÂ messages on silk made with an embroidery machine. 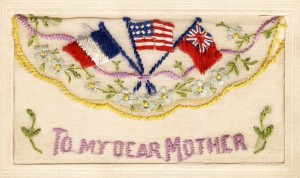 In the 1920’s, the effort was revived in France to especially celebrate mothers and fathers of large families. Medals were even given to the mothers.

In 1950, a law wasÂ passed to celebrate Mother’s Day every year on the last Sunday of May, unless that day is the Pentecost, in which case it’s celebrated on the 1st Sunday in June.

This article was posted on Thursday, May 21st, 2020 at 8:46 pm and is filed under Countries & Cultures, France, Holidays Around the World, Mama Lisa, Mothers Day. You can follow any responses to this entry through the RSS 2.0 feed. You can skip to the end and leave a response. Pinging is currently not allowed.