A place for poems, songs, rhymes, and traditions from around the world for both kids and grown-ups to enjoy!
Advertisement
Meal Traditions in France
July 27th, 2021 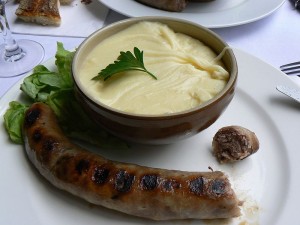 Just like most cultures, the French have two different styles of eating when it’s a normal day versus more formal meals with company.

Daily mealsÂ withÂ theÂ immediate family vary depending on whether the family is eating both lunch and dinner together or just dinner. WhenÂ the whole family eats together both in the afternoonÂ and the evening, the main meal is at noon. Even then, the two meals generally include a starter, a main course, cheese, all this with bread, and/or dessert. Dessert can be a piece of pastry, but it’s most often fruit or yogurt. The evening meal is then lighter in quantity and composition (unless you have teenagers who devour it!).

If both parents work and eat lunch outside the house and the children eat in the cafeteria, the main meal is in the evening because it brings the family together. That does not mean that it’s bigger but simply that it’s the family meal where you can discuss your work and school day.

The standard schoolÂ cafeteria menu consists of 4 courses –Â a starter, a dish of animal or vegetable protein with a side dish, plus a portion of cheese, and dessert.Â In principle, theÂ appetizer and theÂ side dishÂ for the main course are balanced. So if the starter is based on vegetables such as grated carrots, mixed vegetables, coleslaw, green salad, etc., then theÂ side dish for the main course is a starch such as mashed potatoes, lentils, pasta, and vice versa. An appetizer of tabbouleh or pasta saladÂ will have a side dish like green beans or broccoli. There must be a dairy product too, either a portion of cheese (= 30g/1 oz) or a dairy dessertÂ like yogurt.

In middle school, high school and college, students are generally offered a menu where they can choose between a pair of starters, a pair of protein dishes, a pair of side dishes, a pair of cheeses and a pair of desserts.Â And of course, bread and water are available to everyone. Though in universities, the food is more diversified and is often made to go.

For adults, either they work in a company large enough toÂ have a cafeteriaÂ – same meal structure – or people go out to eat in a restaurantÂ with lunch menusÂ with either a “starter + main course” or a “main course + dessert” or a daily special. Some people bring their meal from home like a salad or a sandwich. If they work close to home and have enough time to make the round trip, they often return home to eat at noon. But in the big cities, this isÂ often not possible anymore because many live on the outskirts. You can’t drive 15 km to go home, then eat, and actually be back on time!

The structure of the evening meal is more or less the same as at noon. But unless you have teenagers who are always hungry, it’s not as fillingÂ and it’sÂ lighter. You can eat a salad as a starter or a soup in winter and at the end eat a portion of cheese or dessert. It depends on people’s habits and appetites! For some there’s no dessertÂ and they go straight to the coffee (or the meal is over without coffee!). But theyÂ might snack on fruit in the middle of the afternoon.

RegardingÂ more formalÂ meals withÂ extended familyÂ and friends, we usually start with an aperitif. That includes drinksÂ plusÂ small things to nibble on such as peanuts, chips, and vegetable sticks with dip. If there’s an aperitif, it can be taken at the table or on the terrace or in the garden, depending on the house and the season. Then everything else, from theÂ appetizer to dessertÂ and coffee, is considered the meal.Â For the meal we stay at the tableÂ the whole time. It can last a long time, not because we’re still eating, but because we talk between courses and even after having finished the meal. Among other things we talk about food and cooking! It can go on for hours. The time between dishes tends to be longer as you go along because on the one hand you are not really hungry anymore, and on the other hand, if the person who invites you rushes to bring the next dish, it gives the impression that he’s longing for you to leave. A bad impression!

In other cultures, the part that lasts long mayÂ be before the meal.Â When I went with my friendsÂ to Morocco,Â we were invited to eat one evening with a Moroccan family. We were very surprised when the time before the meal lasted an eternity in our eyes. WeÂ started to eat very late and as soon as the meal was over that was it. While in France, we’re used to talking, discussing, joking, in short, to spendÂ a long convivial moment during the meal. The attitude of the family made us understand that it was time for us to leave. And I don’t think it was because they were working the next day, otherwise we would have eaten much sooner. It was because with company at home they talk before the meal, thenÂ they eat, thenÂ then they leave each other as soon as they’re done eating. It’s a different tradition!

Today IÂ visited friends. To give you an example of an actual formal meal… the aperitif wasÂ a marquisetteÂ (a sweetened citrusy wine spritzer) and coca cola or fruit juice for those who don’t drink alcohol. Snacks were peanuts and cashews, different varieties of potatoÂ chips, radishes, carrots, cucumber sticksÂ and cherry tomatoesÂ with two or three dips, and small toasts with green tapenade.

Since the dish was aligot (a cheesy mashed potato dish) with sausage,Â the hostess didn’tÂ put out a starter course – with the little things for the aperitif, that was enough!

After that, 4 or 5 types of cheese were put out with two very small cups of blackberry jam and apricot jam, and small cubes of melon and watermelon. Then we had flaune for dessert. It’sÂ a tart made with eggs, cheese, sugar and orange water.Â It was a very “cheesy” meal!

After that, we had coffee and SÃ¨te zÃ©zettes, a sweet shortbread biscuit made with wine.

WeÂ don’t do all this for a “normal”Â every day meal. If you serve aligot with a normal meal, you’d serve a green salad as a starter. Cheese wouldn’t be served afterwards since the aligot is half cheese. And you’d serve fruit or a fruit salad for dessert.

Thanks to Monique for describing French meals for us! I’m very hungry right now. :)

This article was posted on Tuesday, July 27th, 2021 at 8:31 pm and is filed under Countries & Cultures, Cuisine, Customs and Traditions, France, French Cuisine, Mama Lisa, Recipes of the World. You can follow any responses to this entry through the RSS 2.0 feed. You can skip to the end and leave a response. Pinging is currently not allowed.

One Response to “Meal Traditions in France”