A place for poems, songs, rhymes, and traditions from around the world for both kids and grown-ups to enjoy!
Advertisement
Love Padlocks – A Tradition Around the World
October 18th, 2011

Let happiness the guarded treasure be
of the mind’s padlock, and true love be key. 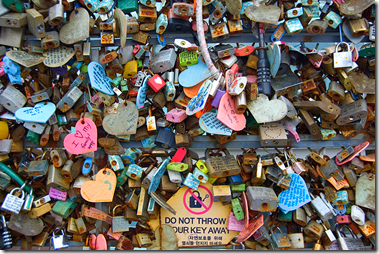 Love Padlocks can bee seen throughout much of Europe and other places around the world like Taiwan.  Peter wrote, "Couples put their names on a lock and then lock them onto some public object to symbolize their love. In Paris a lot of the bridges have them…. I’ve heard some cities cut them off from time to time."  Sometimes they are removed by cities, but sometimes there’s such an outcry from the public that they’re left there. Viva la Romance!

The tree below is on a bridge in Moscow.  It’s totally covered with Love Padlocks. 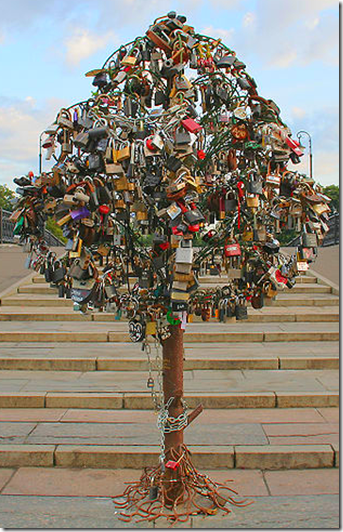 According to Wikipedia, the tradition of Love Padlocks became very popular in Europe in the 2000’s.  Yet the earliest reference to Love Padlocks can be found before WWI in Serbia…  specifically in the town of VrnjaÄka Banja, on the Bridge of Love (Most Ljubavi).  There two sweethearts, Nada and Relja would meet.  Relja went off to war in Greece and eventually fell in love with another woman.  Nada never got over the breakup and died of a broken heart.

The girls in that town started a tradition of putting their names and their sweethearts’ names on padlocks,  They would attach the locks to that same bridge where Nada and Relja met in an effort to bind and protect their own love. 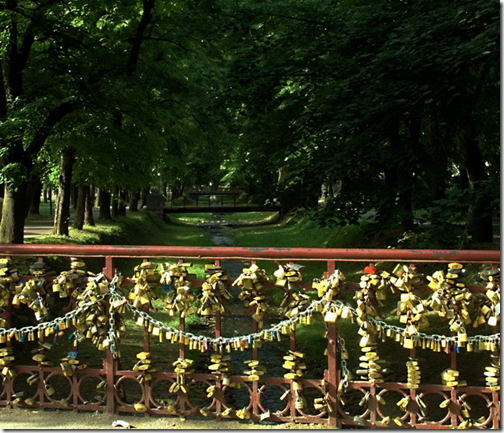 Padlocks on Most Ljubavi – The Bridge of Love (in Serbia)

What a lovely tradition!

This article was posted on Tuesday, October 18th, 2011 at 11:47 am and is filed under Countries & Cultures, Customs and Traditions, France, Holidays Around the World, Italy, Love Padlocks, Russia, Serbia, Symbols, Taiwan, Valentine's Day, Weddings. You can follow any responses to this entry through the RSS 2.0 feed. You can skip to the end and leave a response. Pinging is currently not allowed.

2 Responses to “Love Padlocks – A Tradition Around the World”