A place for poems, songs, rhymes, and traditions from around the world for both kids and grown-ups to enjoy!
Advertisement
Little Songs on Big Subjects
March 17th, 2011

Most Americans in their thirties and forties are familiar with "Schoolhouse Rock", the short cartoons on educational subjects that appeared in between commercials during weekend kids programming in the seventies.  Who among us, of that age, doesn’t know the words that come after "Conjunction junction…" or "Lolly, Lolly, Lolly…"?

What I never knew until recently is that there is a similar series of songs that are equally familiar to an older generation!

It’s called "Little Songs on Big Subjects" and it consists of 11 jingles about tolerance released in 1947.

I first learned of the series when a woman wrote me asking if anyone else remembered a song she knew from her childhood with the lyric ‘with a big bow-wow and a little meow‘.  I posted her question and was pleasantly surprised by the enthusiastic response.

The song, I now know, is "Ol’ Commodore Gray", performed by The Jesters and Roy Ross’s Orchestra. Below you can read the lyrics and listen to a recording. 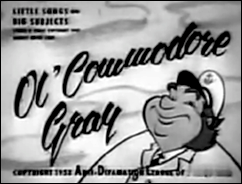 After my blog post talking about it had been up for a while, I was very happy to begin a correspondence with Frances Hayward and Barbara Black, two sisters whose father was Lou Singer.  Mr. Singer wrote the music to the series and his partner, Hy Zaret, wrote the lyrics.

This song, “Ol’ Commodore Gray,” was written and published in 1947 by Argosy Music Corp. It was one of the songs in the series “Little Songs on Big Subjects,” their earliest group of songs. The songs started as Radio jingles and then TV spots and then were recorded by VOX records. The team of Hy Zaret and Lou Singer continued to write educational songs (which they grouped together into series) throughout the 50s and into the 60s. They went from the ‘tolerance’ songs such as Ol’ Commodore Gray (and “It Could Be a Wonderful World,” “I’m Proud to be Me,” others) into the “Now We Know” series of weather, science, etc. songs intended as learning tools for school children. The albums were recorded a few times as the various series continued to develop and eventually every LP had an accompanying songbook so that they could provide a total learning experience to children. The “Ballads from the Age of Science” were very popular and it is within this vast group that “Why Does the Sun Shine?” comes from. Let me know if you need any further information..Barbara

Barbara mentions "Why Does the Sun Shine" because it has recently experienced something of a revival.  It was covered by one of my family’s favorite rock groups, They Might Be Giants, on their recent educational record "Here Comes Science". You can watch their video below.

Like "Ol’ Commodore Gray", many of the "Little Songs on Big Subjects" promoted racial tolerance.  I can’t prove it, but I suspect, based on the strong impression I know they made on many people, that the songs contributed to the civil rights revolution.

For that we all owe Mr. Singer and Mr. Zaret a tremendous dept of gratitude!

UPDATE (3/18/11) – After she read our post, Barbara Black sent us the following letter with additional information:

…While the ‘tolerance’ songs were first heard in 1947, they continued to be greatly successful throughout the 1950’s and into the early 1960’s along with the other numerous educational series of songs that Mr. Zaret and Mr. Singer wrote together.
What started as public service spots on WNEW Radio, New York, the Little Songs moved onto TV spots and then became LPs, initially recorded on VOX Records by The Jesters. Then, Mr. Zaret’s own company, Argosy Music Corp. produced more recordings of the Little Songs with new artists, among them Leon Bibb and Ronnie Gilbert, who sang “Ol’ Commodore Gray” and the other songs in that series. “It Could Be a Wonderful World,” from the same album, was subsequently performed at Town Hall by Pete Seeger and an audience of children. The concert became a hit record, titled “Pete Seeger: Children’s Concert at Town Hall,” produced in 1962. As for “Why Does the Sun Shine,” They Might Be Giants loved the Science and Space songs of the 50’s and in particular they loved “Why Does the Sun Shine,” so much so that they recorded a successful CD in 1993 with “Why Does the Sun Shine” as the title song. The group included “Why Does the Sun Shine” in another album during their career and just recently it was featured on their Grammy-nominated children’s educational CD, “Here Comes Science.”

This article was posted on Thursday, March 17th, 2011 at 6:21 pm and is filed under Cartoons, Government Sponsored Commercials, Little Songs on Big Subjects, Movies, TV & The Internet, Music, Teaching, They Might Be Giants, Tolerance, YouTube. You can follow any responses to this entry through the RSS 2.0 feed. You can skip to the end and leave a response. Pinging is currently not allowed.