A place for poems, songs, rhymes, and traditions from around the world for both kids and grown-ups to enjoy!
Advertisement
Japanese New Years Food Traditions–Kamaboko & Toshikoshi
December 28th, 2011

Ayako Egawa wrote from Japan about Kamaboko, a sort of gelled fish cake that’s eaten there.  The one pictured below was made for the New Year.  The character on these Kamaboko is called Kizuna (meaning bond) which is the symbol for 2011.  (A character is chosen annually in Japan that best symbolizes the year that just passed.)  Here’s what Ayako wrote: 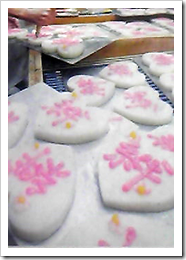 Today is December 28th. and I found a very pretty Kizuna kamaboko photo in our paper.

Kamaboko is our traditional fish paste food, which is used in New Year’s foods too.   In the pic, Kizuna letters were put on heart shaped kamaboko. It was made at Tohoku, a tsunami area. It looks really pretty.

Thanks for sharing Ayako!  I read on Wikipedia that, "Red-skinned and white kamaboko are typically served at celebratory and holiday meals, as red and white are considered to bring good luck." 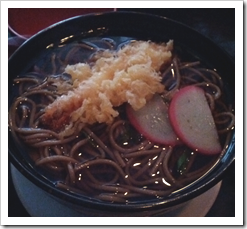 I have had kamaboko here in the US.  We often eat soba soup at a Japanese restaurant.  They put a slice of kamaboko on top of the soup with a piece of shrimp tempura.  Ayako told me soba noodle soup is traditional to eat for the New Year in Japan.  It’s called toshikoshi soba noodles, meaning "crossing into the new year noodles".  I found a recipe for toshikoshi here.

Here’s wishing you good luck in the New Year!

This article was posted on Wednesday, December 28th, 2011 at 10:50 pm and is filed under Countries & Cultures, Cuisine, Customs and Traditions, Folk Lore, Good Luck, Holidays Around the World, Japan, Japanese, Japanese Cuisine, Languages, New Years, Recipes of the World, Toshikoshi, Traditional New Years Food. You can follow any responses to this entry through the RSS 2.0 feed. You can skip to the end and leave a response. Pinging is currently not allowed.