A place for poems, songs, rhymes, and traditions from around the world for both kids and grown-ups to enjoy!
Advertisement
The Right Way to Eat Sushi
September 3rd, 2014 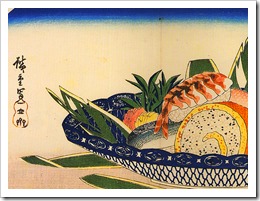 Sushi is a delicious cuisine from Japan!  Did you know there’s a right way to eat it?  Here’s howâ¦

1. Pick up the sushi rolls (the type that’s wrapped in seaweed) with your fingers and dip one side into the soy sauce and put it into your mouth. The type of sushi that’s just rice and fish should be picked up with chopsticks and dipped.

2. Don’t shake off the soy sauce after dipping.

3. After having a piece of sushi, eat a piece of ginger by itself with your fingers.  Don’t put it on the sushi.  That’s considered to be in poor taste.

4. Traditionally you weren’t supposed to put wasabi on the sushi.  The idea was that the chef would prepare it with the perfect amount.  Nowadays, even in Japan you’ll find wasabi on the side so people can decide for themselves how much they want.

Learn more fun facts about eating sushi in the video below!

This article was posted on Wednesday, September 3rd, 2014 at 7:37 pm and is filed under Countries & Cultures, Cuisine, How to Eat Sushi, Japan, Japanese Cuisine, Recipes of the World, Sushi. You can follow any responses to this entry through the RSS 2.0 feed. You can leave a response, or trackback from your own site.