A place for poems, songs, rhymes, and traditions from around the world for both kids and grown-ups to enjoy!
Advertisement
Choosing Who’s “It” in England
September 29th, 2020 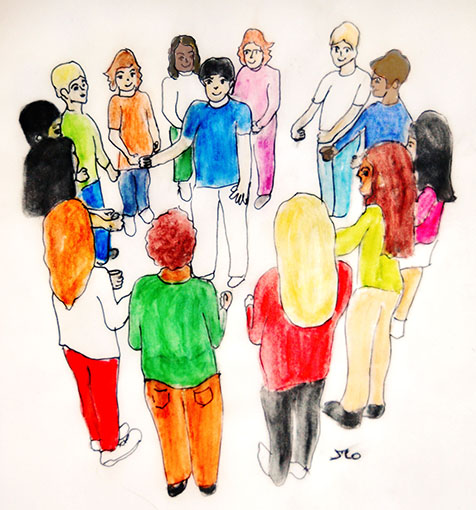 “We used ‘spuds’ to choose IT in a game. We stand in a circle and hold out both hands in a fist. Someone, anyone, would stand in the circle and go round and touch each kid’s fist in turn with their own in time with saying ‘one potato, two potato, three potato, four, five potato, six potato, seven potato MORE’ and on MORE you bring your fist down hard and say ‘YOU’RE IT’ or ‘YOU’RE NOT IT’. If YOU’RE NOT IT, then you stand out of the circle and it goes round until someone is picked. Extra fun ho ho if the kid got mixed up between IT and NOT IT and started running! Also extra fun if you move your fist out of the way on MORE and the kid misses and hits their own knee. If you do that and the picker misses you get to stay in the circle.

Or, again, in a circle, one of you would point to each in turn, including yourself, saying, ‘dip dip dip, my little ship, sails on the ocean, you’re not it’. Then when it was whittled down to two, you hope you can get away quickly.

Did you play the playground game when IT had to throw a tennis ball at the others; if you got hit you would become IT and the first one would drop out of the game, and so on until only two were left? The ones thrown OUT would stand around cheering and, when the game went on too long with the last two, you would bundle (jump on) the one being chased and hold him down so that IT could get him with the ball!

I am in England and best to add that it is Kent (in south east), as I know of various regional variations.”

Thanks for sharing Heidi! If anyone else would like to share how you choose IT where you’re from, please shareÂ in the comments below.

This article was posted on Tuesday, September 29th, 2020 at 3:46 pm and is filed under Mama Lisa. You can follow any responses to this entry through the RSS 2.0 feed. You can skip to the end and leave a response. Pinging is currently not allowed.