A place for poems, songs, rhymes, and traditions from around the world for both kids and grown-ups to enjoy!
Advertisement
How to Choose a Digital Photo Frame – A Great Gift Idea if You Can Afford It!
November 29th, 2008 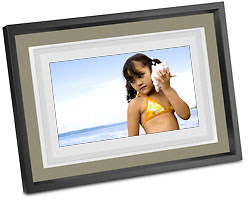 However, I’ve been looking into the possibility of buying one, as a gift, and I’ve come to the conclusion that, if you’re the type of person who cares about image quality, the minimum you’re looking at paying is about $100.00 – here and now in December 2008.

Here are some considerations to keep in mind when buying:

According to PC Magazine, a digital photo frame should have a resolution of at least 640-by-480 pixels.

Also, consider who you’re buying for. If it’s someone who’s not tech-savvy, make sure they can easily access the photos. If I was going to give this as a gift to anyone over 60 or so, it would be for a family member and I’d load it up with photos in advance for them. This way they’d only have to figure out how to scroll through photos or set it to a slide show.

Make sure there’s enough memory built-in to the frame. It should have at least 128 MB or some easy storage for the photos. I would want the built-in memory.

The most standard and less expensive frame right now is 7″ – so if you’re going to go up to 8″ as recommended by Consumer Reports – it’ll cost more money.

I don’t have direct experience with these frames. You can check around the internet to see what other people say about them, if you’d like, and to hunt for bargains. These are the two I’d check out based on what’s out there for a reasonable price right now.

My hope is that next year there will be lower price/higher quality choices!

This article was posted on Saturday, November 29th, 2008 at 9:13 pm and is filed under Customs and Traditions, Gift Giving, Holidays Around the World. You can follow any responses to this entry through the RSS 2.0 feed. Both comments and pings are currently closed.