A place for poems, songs, rhymes, and traditions from around the world for both kids and grown-ups to enjoy!
Advertisement
How Do You Say "Mother" and "Father" Where You Live?
February 25th, 2013 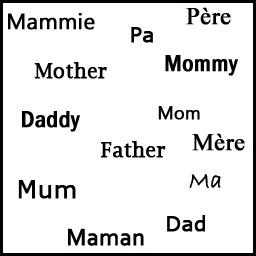 There are many variations in different languages of "mother" and "father".  These are formal words that people use when referring to their parents.  But most words used to address our parents directly are less formal.

In the US, most people don’t say "mother’ and "father" when talking to their parents.  Even when I was a kid and people spoke more formally to adults, not many kids would address their parents that way.  Although you do hear people speak this way in very old movies.  It seems old-fashioned.  Nowadays, we say "ma", "mom" or "mommy" when addressing our mothers, and "da", "dad" or "daddy" to our fathers.

I asked Frances Turnbull who grew up in South Africa, and now lives in England, what they call their parents in those countries.  Here’s what she wrote:

South Africans adopted a lot of Americanization, so I grew up with "mom" and "dad", although more Afrikaans people go with "ma" and "pa". The UK generally goes with "mum" and "dad", the Irish with "mam" (mammie). Down south (towards London) it’s pronounced "m-uh-m", whereas up north (towards Scotland, Manchester) they pronounce it "m-ooh-m". Personally, I call my own mother "mom" (all UK Mother’s Day cards are to "mum"), while my daughter calls me "mum", pronounced "m-ooh-m".

Bolton, near Manchester, has a gorgeous dialect, but they are very particular. When my daughter started school doing the alphabet, they specially asked me to learn to say "u" as "ooh" because my daughter was getting confused (they think "uh" sounds too close to "ah"). So bus is "b-ooh-s", and look/cook/book sound like the "oo" from "boot"… as well as other peculiarities (hair as her, so, u comb ur her …). As for "mother" and "father", I have never met anyone who uses them in that sense, and as I understand it is used when kids are raised by nannies.

I asked Monique Palomares about what they call their parents in France.  Here’s what she wrote:

Please let us know how you refer to your "mother" and "father" in your language and what you call them when talking to them.

Monique Palomares works with me on the French version of Mama Lisa’s World.  Frances Turnbull is the owner of Musicaliti, children’s music and movement sessions and shows in Bolton, UK, using percussion instruments and fun games.

This article was posted on Monday, February 25th, 2013 at 12:01 pm and is filed under Countries & Cultures, England, English, France, Ireland, Languages, Scotland, South Africa, United Kingdom, USA, Words & Phrases, Words for Mother & Father, World Culture. You can follow any responses to this entry through the RSS 2.0 feed. You can skip to the end and leave a response. Pinging is currently not allowed.

23 Responses to “How Do You Say "Mother" and "Father" Where You Live?”