A place for poems, songs, rhymes, and traditions from around the world for both kids and grown-ups to enjoy!
Advertisement
Hiding the Matzo for Passover
April 8th, 2009

One Passover tradition that children love is "Hide the Matzoh".  An adult hides a piece of matzo that’s wrapped in a cloth napkin or put in a baggie.  Then the children try to find it.  Whoever finds the matzoh gets a prize.  The prize is often chocolate money (gelt) or real money (like a dollar). 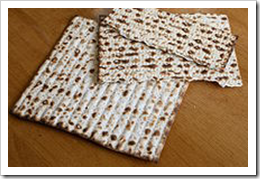 “Hide the Matzoh” can also be part of a larger tradition called Afrikoman.  Here are some details:  In a traditional Seder (Passover meal), there are three whole matzos placed on the Passover table and covered with a cloth napkin.  Before the Seder begins, the middle matzo is broken in half.  The smaller piece is placed back on the plate and the larger one is wrapped and hidden (if there are kids at the Seder).  This piece – the larger piece of the middle matzo – is called the “Afrikoman”.

After the matzo has been found by the children, and the Seder meal has been eaten, the guests eat the Afrikoman.

Some families have a different tradition where the children "steal" the Afrikoman and then hold it for ransom.  The adults then have to give money or a gift to the children to get it back!

Traditionally, the Afrikoman is supposed to be the last thing that’s eaten of the day and it should be eaten before midnight.

Chad Gadyo is a traditional Passover song – you can click the link for the lyrics, a translation, midi and score.  You can hear one version of it below…

This article was posted on Wednesday, April 8th, 2009 at 12:46 pm and is filed under Countries & Cultures, Games Around the World, Hide the Matzoh, Holiday Songs, Holidays Around the World, Israel, Passover, Passover Songs, Seder, USA. You can follow any responses to this entry through the RSS 2.0 feed. You can skip to the end and leave a response. Pinging is currently not allowed.