A place for poems, songs, rhymes, and traditions from around the world for both kids and grown-ups to enjoy!
Advertisement
Happy Evacuation Day!
November 25th, 2011 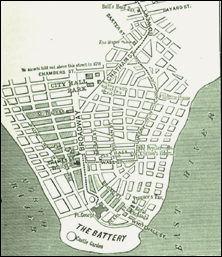 If you’re an American, you might think that the only major holiday in late November is Thanksgiving. But for over a hundred years after the Revolutionary War, the most important event that time of year was November 25th, Evacuation Day.

Evacuation Day commemorates the anniversary of the day in 1783 when the British left New York City.

For most of the Revolutionary War, New York was occupied by British Troops and it served as their command center. The occupation was sometimes very harsh. Thousands of Continental soldiers died in starvation and squalor on prison ships docked in the harbor.

After the Treaty of Paris was signed and London recognized American independence, the British troops were ordered to withdraw. 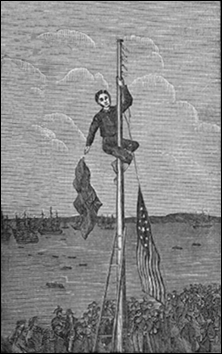 A prominent symbol of English rule was a large flagpole in Battery Park, at the Southern tip of Manhattan island, where a British flag flew. Of course, the British understood their flag would be torn down after they left. So, as a final bit of spite, they rubbed grease all up and down the pole, to make it difficult to climb.

The trick worked for a while, and the American patriots who flooded the park after the English departure found it difficult to climb the pole to tear down the flag. But, after a while they hit upon the idea of nailing wooden handholds into the pole. That worked perfectly. A Continental soldier, John Van Arsdale, who had been a captive on one of the British prison ships, was able to reach the top of the pole and ecstatically tear down the Union Jack and raise the Stars and Stripes.

The anniversary, November 25th, was celebrated in New York for many years, centering around flagpole climbing contests at Battery Park.

Two things served to dampen the tradition. One was Abraham Lincoln’s proclamation in 1883 promoting Thanksgiving as a National Holiday – it’s hard to hold two major celebrations during the same week! The other was the US entry into World War I as allies of the British – few wanted to celebrate the defeat of their new comrades in arms. 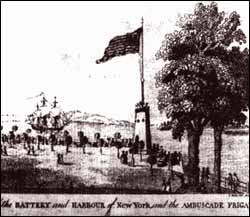 So, if you’re an American, while you’re out shopping on Black Friday, try to pause for a moment and remember the courage of the patriots who fought so long ago to give birth to your country.

You can read more about Evacuation Day on Wikipedia.

Thanks to Jason Pomerantz for writing this article. Jason is in charge of technical and business matters for Mama Lisa’s World.

This article was posted on Friday, November 25th, 2011 at 2:20 pm and is filed under Countries & Cultures, Evacuation Day, Holidays Around the World, USA. You can follow any responses to this entry through the RSS 2.0 feed. You can leave a response, or trackback from your own site.