A place for poems, songs, rhymes, and traditions from around the world for both kids and grown-ups to enjoy!
Advertisement
Halloween in Japan
October 30th, 2014 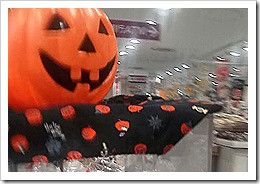 Halloween here is mainly a sales strategy in department stores and supermarkets. Children only go trick-or-treating if it’s arranged in school or with family and friends.

Halloween first appeared in Japan in the 1970’s by the Kiddy Land Company store in Tokyo to promote Halloween goods. In 1983, the first Halloween parade was held to help Halloween sales.  In 1997, another parade started in front of the Kawasaki JR Railway Station with about 3,000 people wearing costumes.  Nowadays more than 100,000 people go to watch that parade.

On the Ogasawara islands, located about 1,000km from Tokyo, many Americans and Europeans live there. Halloween is a custom that’s celebrated every year. Many little children enjoy trick-or-treating.  Also since 2005, in Hakuba village, Halloween events take place with European and American residents and also many tourists on the last Sunday of October. Adults and children there enjoy trick-or-treating, Jack-o-lantern contests, and costume contests.

In my own experience this week, I came across the following Jack-o-lantern Sushi at the supermarket. It was made with rice and Norwegian salmon. 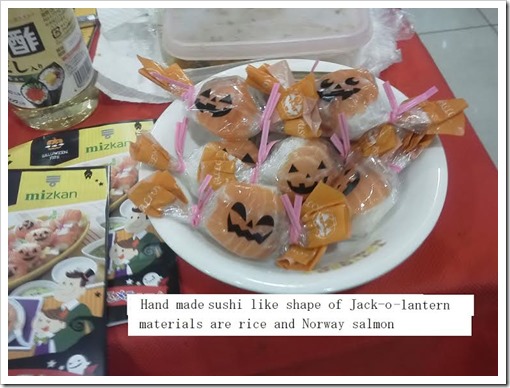 My view and opinion about Halloween in Japan

I think Halloween customs are going to take root here in Japan just like Christmas (but without any religious meanings). And also companies will utilize the holiday to boost sales.

But in regards to trick-or-treating by children, this won’t be so tolerated among Japanese people. Because most Japanese people donât like tricks by children, I think. If you did any graffiti, you would be arrested with the charge of damaging property. I think âtrick-or-treatingâ is available for small groups such as among school friends, or their families to enjoy.

The Ministry of âEducation, Culture, Sports, Science and Technologyâ is now recommending starting teaching English to younger grades in elementary school.   So pupils will learn about European and American cultures such as Christian-related customs in English learning classes. It is a quite felicitous reform I think. I hope they keep Japanese traditional customs and playing too.

Thank you for reading.

This article was posted on Thursday, October 30th, 2014 at 3:34 pm and is filed under Countries & Cultures, Cuisine, Halloween, Halloween Costumes, Holidays Around the World, Japan, Japanese Cuisine, Recipes of the World, Sushi. You can follow any responses to this entry through the RSS 2.0 feed. You can skip to the end and leave a response. Pinging is currently not allowed.