A place for poems, songs, rhymes, and traditions from around the world for both kids and grown-ups to enjoy!
Advertisement
Funeral Traditions in France
August 10th, 2012 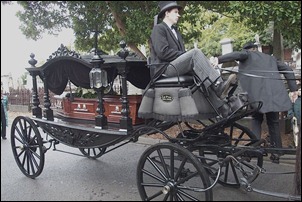 Monique wrote to me about a funeral she recently went to in France and about French Funeral traditions in general.  Here’s her letter:

It was awfully hot on the day of the funeral so it was decided that we would drive to the churchyard. If the burial had been in the morning or if the weather had been mild, we’d have walked behind the hearse up to the churchyard.

Btw, they called the street that goes up to the churchyard "Chemin de l’ÃgalitÃ©" (Path of Equality) because we’re all equal in the eye of death.

I asked Monique if it’s common in France to follow the hearse on foot.  In the US, we generally drive behind the hearse to the graveyard.  The cars in the procession all have their headlights on so other drivers know to let the procession pass.  Here’s how Monique answered my question:

Following the hearse on foot: in small towns, yes, it’s typical. When I was a child, the hearse was an "actual" horse-drawn hearse and people would walk behind it.  People still follow the hearse on foot in small towns because the graveyard isn’t far from the church if there’s a religious service, or even if they go from someone’s house if it’s somewhat on the outskirts of the town.

If you check with Google maps, you’ll see that our graveyards are quite close (within a mile). Btw I was looking at the towns around my father’s birth town and found another graveyard street called "rue de l’Ã©galitÃ©" so I suppose there are many streets with that name.

Besides, in small towns, everybody knows everybody. I wouldn’t say it’s more fun to go on foot but this is the idea anyway though it’s not about fun it’s about being still alive and enjoying the fact in a certain way; the living accompany the dead and unless it’s a child or a young person in which case it’s felt as unfair and unjust, and then everybody grieves.  When it’s an older person they talk of him/her but also they give one another news about family members, etc. Besides, it gives a feeling of togetherness that makes everybody feel better, even the people who grieve most. We humans are social animals, we need to feel we belong to a "tribe", that we’re not alone and the "tribe" -whatever the "tribe" may be – is here for us for help and support.

Since we drove to the funeral we went to, at the graveyard we met other people who had gone directly from their homes too. It’s the same "ritual" at each funeral: "Who are you?" "I’m So and So’s son/daughter" "I wouldn’t have recognized you" and "It’s been so long! How are you doing? And how are your children? Do you have any grandchildren yet?" and "Is that your grandson? Oh my!" and whispering "Who’s that?" "So and So" and "Who was the man like this and that…?"

In small towns, the family of the deceased places a book and pen on a small table that’s covered with a black cloth by their front door. When people pass by, they write their condolences in the book. In bigger towns and in cities, the books are at the funeral homes.

At the end of the ceremony or when people are at the graveyard, the family members thank the people who came to attend the funeral. They stand in a row and shake hands with them. Sometimes, when the deceased was a young person or someone who died suddenly and the family members are too disconsolate, the priest, or the person who runs the ceremony if it’s not religious, says, "there will be no hand shaking".

Often, the closest family members of the deceased prepare drinks and food at the home. After the funeral, relatives and close friends are invited to have a drink and a small bite. It’s a way for the those in mourning not to be left alone at the end of the funeral. It also helps everybody to unwind after the surge of emotions the funeral causes.

In yesteryears, when people would travel slowly, the family would cook a big meal so that everybody who came wouldn’t go back home with an empty stomach. I don’t know if this is still done in some areas, I never saw it done myself.

Thanks Monique for sharing these traditions with us.

The tradition of people following horse drawn hearses on foot to the graveyard was not unique to France.  They also followed this custom in England and sometimes in the U.S.

It’s interesting to learn about funeral traditions in different cultures. I think it’s important to be able to speak with children about this type of subject.  When it’s talked about, perhaps it’s made a little less scary.

Monique works with me on the French version of Mama Lisa’s World.

This article was posted on Friday, August 10th, 2012 at 5:45 pm and is filed under Countries & Cultures, Customs and Traditions, France, French, Funeral Traditions, Languages, USA. You can follow any responses to this entry through the RSS 2.0 feed. You can skip to the end and leave a response. Pinging is currently not allowed.

13 Responses to “Funeral Traditions in France”