A place for poems, songs, rhymes, and traditions from around the world for both kids and grown-ups to enjoy!
Advertisement
French Omelette made with 15,000 Eggs!
March 23rd, 2016 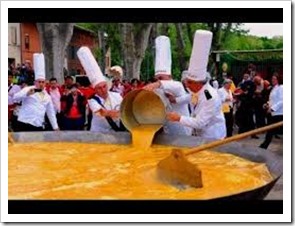 In the town of BessiÃ¨res, all of the chefs come out on Easter Monday to make a gigantic omelet with 15,000 eggs! They’ve been making huge omelets every year since 1972.

People call it the "Omelette of Gargantua". Gargantua is a giant from a novel by FranÃ§ois Rabelais in the 16th century.

The event is called the Easter Omelet Festival. Everyone from the town is invited to eat the omelet for free.

Legend has it that early in the 19th century, Napoleon and his army stayed overnight in the town of BessiÃ¨res. He ate a magnificent omelette at the inn. It was so good that he ordered the townspeople to gather all the eggs in the town to prepare a giant omelet for his army. It’s said that this started the French tradition of eating Easter omelettes.

Since then, the people of BessiÃ¨res have made omelets every year to feed the poor. In 1973, they started making one giant omelet for the whole town. The tradition has spread to other countries.

In the video below, that’s in French, you can see images of the Easter Omelet Festival…

This article was posted on Wednesday, March 23rd, 2016 at 10:20 pm and is filed under Countries & Cultures, Easter, Easter Monday, France, Holidays Around the World, Omelets, Rabelais, Recipes of the World. You can follow any responses to this entry through the RSS 2.0 feed. You can skip to the end and leave a response. Pinging is currently not allowed.