A place for poems, songs, rhymes, and traditions from around the world for both kids and grown-ups to enjoy!
Advertisement
Foods That Will Win the War…
December 20th, 2008 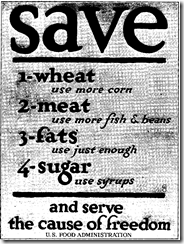 No joke!  There’s an old cookbook called Foods That Will Win The War And How To Cook Them (1918), by C. Houston Goudiss and Alberta M. Goudiss from the time of World War I.  It tells what foods to eat – or to cut down on – so they can be sent to the allies in Europe.  Here’s an excerpt.

Food will win the war, and the nation whose food resources are best conserved will be the victor. This is the truth that our government is trying to drive home to every man, woman and child in America.

.This book is planned to solve the housekeeper’s problem. It shows how to substitute cereals and other grains for wheat, how to cut down the meat bill by the use of meat extension and meat substitute dishes. it shows the use of syrup and other products that save sugar, and it explains how to utilize all kinds of fats. It contains 47 recipes for the making of war breads.

Not only have its authors planned to help the woman in the home, conserve the family income, but to encourage those saving habits which must be acquired by this nation if we are to secure a permanent peace that will insure the world against another onslaught by the Prussian military powers.

.One teaspoonful of sugar per person saved each day would insure a supply ample to take care of our soldiers and our Allies. These quantities mean but a small individual sacrifice, but when multiplied by our vast population they will immeasurably aid and encourage the men who are giving their lives to the noble cause of humanity on which our nation has embarked. 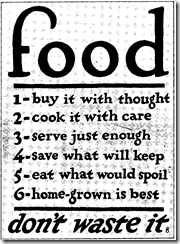 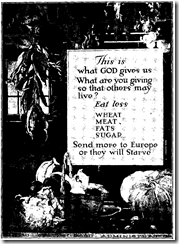 This article was posted on Saturday, December 20th, 2008 at 3:23 pm and is filed under Book Sites, Books & Stories, Cookbooks, Countries & Cultures, Recipe Links, Recipes of the World, USA. You can follow any responses to this entry through the RSS 2.0 feed. You can skip to the end and leave a response. Pinging is currently not allowed.