A place for poems, songs, rhymes, and traditions from around the world for both kids and grown-ups to enjoy!
Advertisement
Filipino Wedding Traditions – Candles, Coins, Veil and Cord
December 2nd, 2011 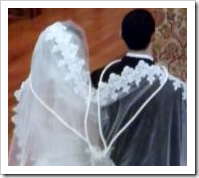 There are traditional Filipino Catholic wedding customs that involve candles, coins, a veil and cord.  Here’s what each means…

The Candles â The lighting of the candles usually takes place at the beginning of the ceremony.  One person from each side of the family lights a candle symbolizing God’s presence at the union.  Sometimes the couple will then take those lit candles and light a third candle together, signifying that their families are united through them.  The third candle is called a "unity candle" and has its origins in the US.

The Coins â The wedding coins are called arras.  The custom of the groom giving wedding coins comes from Spain.  The groom gives the bride 13 coins to symbolize their mutual prosperity.  Traditionally, it was like a dowry and thus it also symbolizes his promise to support her and their family.

The Veil â After the couple has exchanged rings, they kneel side by side.  Then two chosen people will take one end of the bride’s veil and drape it over the groom’s shoulders.  It signifies that they are dressed for the world as one.

The Cord â Next, a white decorative silk cord called a yugal is placed over the couple’s shoulders in the sign of infinity (a sideways figure-eight).  It symbolizes everlasting fidelity and signifies that they walk the world as equals.

It’s lovely to have symbolism as a part of any wedding ceremony.

This article was posted on Friday, December 2nd, 2011 at 2:39 pm and is filed under Arras, Countries & Cultures, Customs and Traditions, Filipino Wedding Coins, Candles, Veil and Cord, Holidays Around the World, Philippines, Symbols, USA, Weddings, Weddings. You can follow any responses to this entry through the RSS 2.0 feed. You can skip to the end and leave a response. Pinging is currently not allowed.