A place for poems, songs, rhymes, and traditions from around the world for both kids and grown-ups to enjoy!
Advertisement
Easter Monday – Picnics and Water Fights
March 18th, 2016

Easter’s coming soon! Did you know that in many countries the day after Easter, called Easter Monday, is a public holiday? The map above shows in yellow all of the countries that celebrate it.

There are picnics, egg rolling contests and dousing of people with water that was blessed on Easter Sunday.

In Italy and Southern France, they have picnics. The Italians eat the hard boiled eggs that were decorated the day before Easter. The French serve omelets. 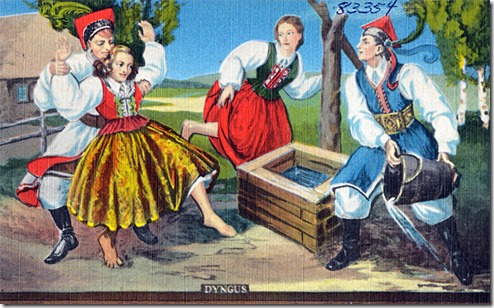 In Poland, the day is called Åmigus Dyngus. It’s also called lany poniedziaÅek (Wet Monday).  Traditionally it was an ancient tradition of young men looking for young ladies to marry. The boys would soak girls with water and hit them with pussy willow branches. The girls would get their revenge on Easter Tuesday by dousing the boys! Nowadays, it’s become a big water fight, involving water guns, spray bottles, squirt bottles and buckets.

You can learn a Åmigus Dyngus Song here.

Agnieszka Magnucka wrote, "I remember, when I was in primary school, that boys were trying to pour out water on girls. We were running away, but not too fast, we were pretending we didn’t want to get soaking wet…"

Though Agnieszka wrote that sometimes the custom was banned when she was older because some boys went overboard with the tradition.

If you’re visiting Poland on Easter Monday, make sure to wear galoshes and a raincoat!

Thanks for sharing your experience Agnieszka!

This article was posted on Friday, March 18th, 2016 at 2:47 pm and is filed under Countries & Cultures, Czech Republic, Easter, Easter Monday, Holidays Around the World, Hungary, Italy, Poland, Slovakia, Ukraine. You can follow any responses to this entry through the RSS 2.0 feed. You can skip to the end and leave a response. Pinging is currently not allowed.

One Response to “Easter Monday – Picnics and Water Fights”