A place for poems, songs, rhymes, and traditions from around the world for both kids and grown-ups to enjoy!
Advertisement
Easter Egg Dyeing + an Egg Game in Italy
April 25th, 2011

I asked Emanuela Marsura about Easter egg traditions in Italy and whether or not they dye eggs.  Here’s what she wrote back:

We paint eggs with aniline dyes [inedible], and also with natural coloring: red onion skins, leaves of stinging nettles, red turnips and coffee grounds. Some people paint the eggs with tempera, but afterwards you can’t eat them.

In many places games are played with eggs: the Rigolana or RighÃ¨a, as we say here in our Venetian dialect, a game that we play especially on Easter Monday. The day after Easter is Easter Monday.  We call it Monday of the Angel.

In a large field or meadow, in a courtyard, or in certain places in the village, we prepare a kind of basin, built with clay, and stones.   Children, teenagers, parents and grandparents roll their colored hard-boiled eggs with the aim of hitting those of other competitors or passing over the coins left on the bottom of the basin field. 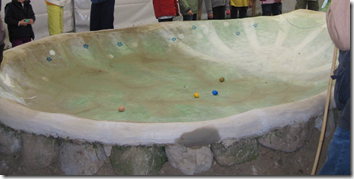 You can win the game if you hit the eggs of the other players in the clay basin . You can get the money if your egg rolls over it. This is a fun game because you’re with friends and family: It isn’t important what you win, because we play for only five or ten cents.

It’s a tradition of the province of Treviso, a game that has its roots in the nineteenth century and now is kept alive by the gaming community in RighÃ¨a.

The Ranzini is a long stick that’s curved in a loop at the end.  It’s used to fish out the eggs.

I read that it’s good to have salt on hand so you can eat your egg afterwards!

If anyone would like to provide the lyrics to the song they’re singing, I’d love to post them.

This article was posted on Monday, April 25th, 2011 at 3:08 pm and is filed under Countries & Cultures, Dyeing Eggs Naturally, Easter, Easter Egg Games, Easter Eggs, Games Around the World, Holidays Around the World, Italian, Italy, Languages. You can follow any responses to this entry through the RSS 2.0 feed. You can skip to the end and leave a response. Pinging is currently not allowed.

3 Responses to “Easter Egg Dyeing + an Egg Game in Italy”