A place for poems, songs, rhymes, and traditions from around the world for both kids and grown-ups to enjoy!
Advertisement
Duck, Duck, Goose Around the World
September 18th, 2014 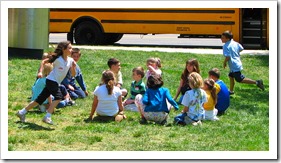 Duck, Duck, Goose is a game every English-speaking kindergartener knows.  In other cultures, there’s a similar game called Drop the Handkerchief.  Here’s the differenceâ¦

Drop the Handkerchief works similarly to Duck, Duck, Goose, but the person who is "It" does not usually tap the other kids.  Here’s how it’s playedâ¦

These games are great ways to teach kids about differences as well as similarities between cultures. They can also be used to help teach another language.

Here are some versions of these games from around the world:

Sadao wrote from Japan to let me know that "Drop the Handkerchief" is played there… but there don’t seem to be any words that go with it.

Please feel free to share your country’s version of this game in the comments below.

This article was posted on Thursday, September 18th, 2014 at 2:54 pm and is filed under Australia, Countries & Cultures, Drop the Handkerchief, Duck, Duck, Goose, England, Games Around the World, The Mailman (The Postman), USA. You can follow any responses to this entry through the RSS 2.0 feed. You can skip to the end and leave a response. Pinging is currently not allowed.

6 Responses to “Duck, Duck, Goose Around the World”