A place for poems, songs, rhymes, and traditions from around the world for both kids and grown-ups to enjoy!
Advertisement
Double, double toil and trouble…
October 15th, 2011 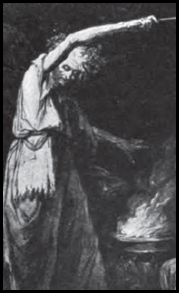 The chant "Double, double toil and trouble" from Shakespeare’s "MacBeth" echoes in my mind every year at Halloween-time.  Here you can listen to it and read along…

Round about the cauldron go;
In the poisonâd entrails throw.
Toad, that under cold stone
Days and nights has thirty-one
Swelterâd venom sleeping got,
Boil thou first iâ the charmed pot. Double, double toil and trouble;
Fire burn, and cauldron bubble. Fillet of a fenny snake,
In the cauldron boil and bake;
Eye of newt and toe of frog,
Wool of bat and tongue of dog,
Adderâs fork and blind-wormâs sting,
Lizardâs leg and owletâs wing,
For a charm of powerful trouble,
Like a hell-broth boil and bubble. Double, double toil and trouble;
Fire burn and cauldron bubble. Scale of dragon, tooth of wolf,
Witchesâ mummy, maw and gulf
Of the ravinâd salt-sea shark,
Root of hemlock diggâd iâ the dark,
Liver of blaspheming Jew*,
Gall of goat, and slips of yew
Silverâd in the moonâs eclipse,
Nose of Turk and Tartarâs lips,
Finger of birth-strangled babe
Ditch-deliverâd by a drab,
Make the gruel thick and slab:
Add thereto a tigerâs chaudron,
For the ingredients of our cauldron. Double, double toil and trouble;
Fire burn and cauldron bubble. Cool it with a baboonâs blood,
Then the charm is firm and good.

*Some of the lines in this speech are offensive to our twenty-first century ears, and I hesitated to print it here, on a site with significant family traffic. But rather than censor the greatest writer in the English language, I think itâs better to present his words honestly, and I encourage my readers with children to use the opportunity to discuss the changes in attitudes that society has gone through in the four hundred years since Shakespeare lived.

Check out The Three Witches Spell in Macbeth â Double, Double Toil and Trouble for the longer version that also explains the obscure terms in the chant.  You can also watch some YouTube videos of it there.

Go to Librivox to listen to the whole play of Macbeth.

Now the charm is firm and good!

This article was posted on Saturday, October 15th, 2011 at 9:38 am and is filed under Authors, Books & Stories, Countries & Cultures, England, English, Halloween, Halloween Poems, Holidays Around the World, Languages, Macbeth, Poetry, Recordings, Recordings of Books, Recordings of Poems, Shakespeare, USA. You can follow any responses to this entry through the RSS 2.0 feed. You can skip to the end and leave a response. Pinging is currently not allowed.