A place for poems, songs, rhymes, and traditions from around the world for both kids and grown-ups to enjoy!
Advertisement
Criss Cross Applesauce
February 26th, 2019 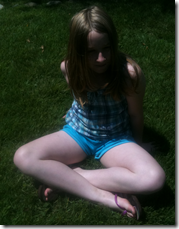 It seems saying criss cross applesauce for sitting cross legged goes back to the seventies. Thatâs the earliest reference Iâve found to it in print. It can be found in the book called âElementary Physical Education: A Developmental Approachâ (1978) by Daniel D. Arnheim, Robert A. Pestolesi. In that book they recommended using the expression to be culturally sensitive, âUse inclusive language: Say, âboys and girls,â âfolks,â âeveryone,â or âyou all.â Donât use stereotypical phrases, such as âsit Indian styleâ or âsit tailor style’; instead, say âsit with your legs crossedâ or âsit crisscross apple sauce.’â

Itâs my impression that itâs also said for the sound of it (sometimes in a sing-song voice) and that people donât think about the pc aspect of it so much any more. Itâs just the expression that teachers use now.

There are rhymes that use the phrase that go back a little earlier. One is called Criss Cross Applesauce and is played on the childâs back. Itâs similar to the X Marks the Spot rhyme.

Thereâs a reference to âCriss cross applesauceâ in a book called âStreet Gamesâ (1976) by Alan Milberg. It says, âThe final part of the ritual [to decide the rules of a game] is called âcementing in the rules.â Once the leader specifies what should or should not be included in the game, he sings, âCrisscross applesauceâ¦’â Is anyone familiar with using it in this way?

As an aside, thereâs also a book called âCriss-Cross. Applesauceâ (1978) TomÃ© Do Paola. Itâs about reading together as a family.

Did anyone use the expression as part of any other rhymes or games? Please let us know in the comments below.

This article was posted on Tuesday, February 26th, 2019 at 6:38 pm and is filed under American Nursery Rhymes, Countries & Cultures, Criss-Cross Applesauce, England, Games Around the World, Mama Lisa, Nursery Rhymes, USA. You can follow any responses to this entry through the RSS 2.0 feed. You can skip to the end and leave a response. Pinging is currently not allowed.