A place for poems, songs, rhymes, and traditions from around the world for both kids and grown-ups to enjoy!
Advertisement
Chrysanthemums in Japan
January 19th, 2016

“Chrysanthemums are quite auspicious here in Japan. I would say it is a noble flower for Japanese people.Â  It’s even used as the seal (crest) of the Imperial Family. I like chrysanthemums and their scent.” -Sadao Mazuka, Japan

Chrysanthemums are called ã­ã¯å± Kiku Flowers in Japanese. Just like many other countries, they’re a symbol of Autumn. There are chrysanthemum festivals in Japan every Fall. The plants are often treated like bonsai or topiaries in the months leading up to the festivals.Â  They’re trained to grow in specific shapes. You can see this in the image below where the chrysanthemums make up the clothes of the statues of three people. 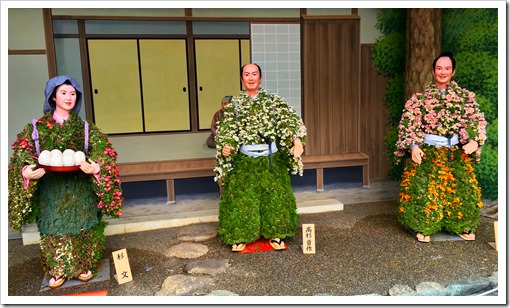 Read more: Chrysanthemums are more than just a symbol of autumn

This article was posted on Tuesday, January 19th, 2016 at 5:05 pm and is filed under Countries & Cultures, Customs and Traditions, Japan, Symbolism of Chrysanthemums, Symbolism of Flowers, Symbols. You can follow any responses to this entry through the RSS 2.0 feed. You can leave a response, or trackback from your own site.

One Response to “Chrysanthemums in Japan”